A funeral (matakicca) is a ceremony related to disposing of the body of someone who has died. Funerals for ordinary people at the time of the Buddha were fairly simple. Four men would carry the body to the charnel ground (susana) followed by a procession of relatives and friends who would be carrying torches and weeping and wailing (Ja.VI,464; Sn.580). The usual way of disposing of the body was by cremation or exposure to the elements. If the first of these was done the body was placed of the pyre (citaka), flowers, incense and garlands were placed on the body, the participants circumambulated the pyre three times and then it was ignited. On the 12th or sometimes the 13th day after the death the saddha ceremony was held where food, clothing and other gifts were given to brahmans in the name of the deceased (D.I,97). If you go to Gaya even today you can see pilgrim 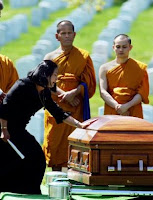 s doing the saddha puja for their parents, probably not much different from how it was done at the Buddha's tome.
The Buddha’s funeral was arranged by the Mallas, the people of Kusinara, and was conducted very similar to they way royal funerals are described in the Ramayana and other later literature. The Mallas erected tents and awnings and spent several days honoring the Buddha’s body with incense and garlands and to the accompaniment of music and dancing. After six days of this, they washed their heads, dressed in new clothes and then put the body in an iron coffin, smeared it in oil and wrapped it in several layers of fine cloth (D.III,161-4). Then body was taken through the town, out through the gate and then cremated. The ashes or eminent people were usually then interned under an earthen mound (thupa) often situated at a crossroads (catumahapatha). In the case of the Buddha, his ashes were divided into eight, each portion being placed in such a mound.
Today, different Buddhist cultures conduct their funerals in different ways – from simple and dignified as in Sri Lanka or elaborate and colorful as in Thailand. In China, Vietnam and Tibet, the bodies of esteemed monks are sometimes mummified and in Tibet the bodies of ordinary people are sometimes dismembered and fed to vultures.
Posted by Shravasti Dhammika at 12:22 AM

Can you say something about sarira?

I am wondering if it is a modern thing, because I don't recall reading about it in the sutta.

My understanding is that ten stupas were erected after the Buddha's cremation. His remains were divided into eight for the rulers of the eight kingdoms, but then two other stupas enshrined the cremation place itself, and then the container that had held the ashes. Is that right?

According to the Mahaparinibbanasutta (Digha Nikaya 16) the remains from the body were divided into eight, the urn formed a 9th relic, and the ashes a 10th. See http://www.ancient-buddhist-texts.net/English-Texts/Great-Emancipation/44-Distribution.htm for a translation of the relevant section.