As we are talking about hell I thought it only fair to have a look at the Petavatthu, the seventh book in the Khuddaka Nikaya which is the fifth collection of the Sutta Pitaka, one of the three divisions in the Tipitaka, the Buddhist scriptures. This text and its companion text, the Vimanavatthu, is easily the least interesting book in the whole Tipitaka and one can only wonder how it ever got included in it. The title means ‘Story of Ghosts’; peta = ghost + vatthu = story. It consists of about 814 verses embedded in prose stories. Only the verses are canonical. There are four chapters containing 12, 13, 10 and 16 stories each. The exact number of verses is unclear because it is sometimes hard to tell where the story ends and the verse begins. The stories tell of the mean, nasty or immoral things people did which led them to being reborn as a ghost. Without exception these stories are dull, rather puerile and even without literary merit. Winternitz commented, ‘The truly great and profound doctrine of kamma…which has found expression in…Buddhist texts in so many beautiful sayings and legends, is most clumsily explained by means of examples in little stories, whose metrical form is their only poetical attribute.’
And what about ghosts? The Rg Veda, the oldest Hindu scripture, speaks of the ‘realm of the fathers’ (pitarah), a sort of shadowy world where everyone went when they died. In later centuries this term 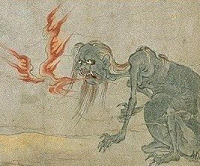 fused with the term preta, ‘departed’ and led to the creation of the word peta and the idea of a ghostly realm or existence (Pali pettivisaya, later petaloka ‘ghost world’). Brahmanism later developed the idea that making offerings to ghosts could raise the quality of their gloomy existence. The Buddha mentioned that one of the reasons people wanted a son was so he could make offerings to them after they had died (A.III,43). A brahmin mentioned to the Buddha that he made saddha offerings to the departed (A.V,269), a practice you can still being done in Gaya to this day. The Buddha seems to have taken this belief for granted or at least saw that it might grow out of kindly motives and he encouraged some people to make offerings to the departed. Typically, he added an ethical dimension to the belief, saying that not everyone, but people who had been immoral might get reborn in the ghost world. He said, ‘By knowing his mind with mine, I have known a certain man who because of his behavior has taken such a path so that after the breaking up of the body he will be reborn as a ghost and will experience much painful feelings. It is just like a tree growing on rocky ground with sparse foliage and casting an uneven shadow. One man might see another, exhausted by the heat of the day, weary, parched and th 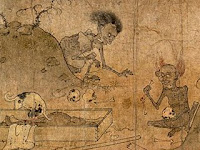 irsty, going on a path that leads directly to that tree and later he would actually see him sitting or lying in the shade of that tree experiencing much discomfort’ (M.I,75). It seems that the early Buddhists incorporated the existing Brahminical belief in the ghost realm into their cosmology and then had to distinguish it from purgatory. They did this by saying that the committing of prolonged evil would result in rebirth in purgatory, lesser evil or evil associated with craving, longing and wanting would result in rebirth in the ghost realm.
Interestingly, the Buddha considered ‘talk about ghosts’ (petakatha) to be unedifying and unbecoming for serious Dhamma practitioners (D.I,8). The Petavatthu would by any interpretation qualify as ‘talk about ghosts.’ It is also interesting to note that the Thai Sangha has never recognized either the Petavatthu or the Vimanavatthu as canonical. All scholars who have examined the Petavatthu – Rhys Davids, H. S. Gehman and Prof. Abhayanayaka – ascribe to it a late date. Winternitz wrote that it ‘probably belongs to the latest stratum of literature assembled in the Pali Canon.’
The pictures are of petas as imagined by medieval Japanese artists.
Posted by Shravasti Dhammika at 12:20 AM