I would like to share with you pictures of two Buddhist sculptures that I have always deeply admired. The first is of a pensive and meditative Maitreya from Korea. The second is of Avalokitesvara from Sri Lanka. He is depicted as a beautiful youth, strong but not vaulting, relaxed but not soft, masculine but not macho. This exquisite statue was found near Kurunagala just a few years ago together with two equally beautiful golden statues of the Buddha. 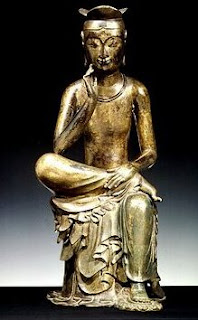 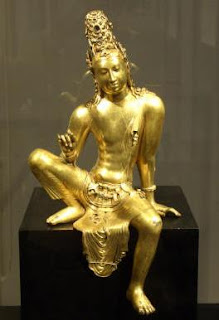 From the 1st of January I will be looking at the issue of euthanasia (mercy killing) from the Buddhist perspective. This subject has been hotly debated in Singapore of late but as is often the case the Buddhist position got exactly one line in the press, whereas other faiths got much wider coverage. I am not sure there is a clear 'Buddhist' stand on euthanasia but I would like to contribute some Dhammic thoughts on the subject.
Posted by Shravasti Dhammika at 12:11 AM

In Christianity, there is the famous sculpture - The Pietà by Michelangelo, where Jesus is shown after the crucification in a very broken state:

I wonder if there is a similar sculpture or painting showing The Buddha in sickness, old age or death when he was 80?

After all in the Upajjhatthana Sutta, it's written:

"
"There are these five facts that one should reflect on often, whether one is a woman or a man, lay or ordained. Which five?

"'I am subject to aging, have not gone beyond aging.' This is the first fact that one should reflect on often, whether one is a woman or a man, lay or ordained.

"'I am subject to illness, have not gone beyond illness.' ...

"'I will grow different, separate from all that is dear and appealing to me.' ...

Dear Venerable, I just visited the "Serenity in Stone" exhibition at the Peranakan Museum. The stone Buddha and Bodhisattva sculptures are most exquisite, although most are broken in pieces. One of them is the "Pensive Figure" (http://www.iht.com/slideshows/2009/01/21/arts/jessop-buddha.php?index=2), which the tour guide referred back to the Korea sculpture. I am so glad to see it here!