I have long thought of Christmas as one of the most beautiful of all religious festivals. It has everything one would need to delight children and perhaps even get adults to be temporary moved by a sense of wonder - a mother and her new-born child, innocent animals and simple shepherds looking on, three wise men bringing treasures from the East, a dusting of snow on the hills and presiding over it all, a beautiful twinkling star in the black velvety sky. The fact that the story is a myth is irrelevant. It’s the imagery and the atmosphere it helps create that counts. And if the people stop for even a while to think about the Christmas blessing 'Peace on earth, good will to men' it might even soften a few cynical and hard hearts. It is for these reasons that I always celebrate Christmas, not with binging and boozing but with quiet, joyful reflection.
I think that the commercialization of the festival has robbed us of something special and meaningful and made our lives just that little more colorless. When we banish the spiritual dimension from religious festivals like Christmas our need for the nourishment they give forces us to 'invent' fake festivals like Moomba (in Australia) Chingay (here in Singapore) or Macys Parade (in New York) in an attempt to evoke something beyond just 'having a good time.' And such fake festivities are a poor substitute for celebrations like Christmas which have a 2000 year tradition behind them. 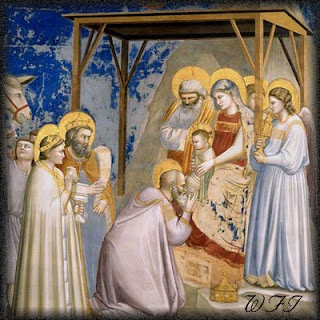 When someone says to me 'Happy Holidays' at Christmas I feel like hitting them over the head with my umbrella. Apparently this 'neutralized' and 'secularized' excuse for a blessing is ejaculated so that 'non-Christians will not feel excluded' or so they will 'not feel offended' by Happy Christmas. If you feel offended by someone wishing you happiness at a time they are happy, then I think there is something seriously wrong with you. And if you can't join others in their celebrations, even if the theology behind it does not correspond with yours, then I think you lack mudita. As usual, the Buddha had something to say that is relevant to this issue. He said that the sage would happily participate in Brahminacal sacrificial festivals (yanna) and traditional family celebrations (yajanti anukulam sada) where nothing against the Precepts was involved (S.I,76).
I wish all my readers and Christian friends and their families a most happy and joyous Christmas.

Why be offended by by a Happy Holidays greeting? Our Muslim friends have just celebrated the end of the Haj and the Jews among us are marking Hannukah, while many others of us are getting ready for the new year.

Even as a practicing Buddhist I do enjoy the Christmas festivities. My children love to put up a Christmas tree and we give each other gifts on Christmas day. I don't want my kids to feel left out or disadvantaged. I encourage everyone in Australia to celebrate Christmas because I see this as primarily a loveable cultural thing. The birth of Jesus has actually been celebrated only for about 1700 years.

Because nobody knows the date Jesus was born, Christmas is celebrated at different dates in different countries. It was originally celebrated in spring!
Wikipedia says “Pagan Scandinavia celebrated a winter festival called Yule, held in the late December to early January period. As Northern Europe was the last part to Christianize, its pagan traditions had a major influence on Christmas. Scandinavians still call Christmas Jul. In English, the word Yule is synonymous with Christmas, a usage first recorded in 900.”.

My understanding is that Christmas was created when the European Christian leaders took over the ancient pagan winter solstice celebration. This explains the pagan symbols of the tree, Yule log etc. I imagine that the ancient Europeans in the middle of cold winters saw good reason to celebrate the winter solstice because from that day onwards each day would get progressively longer and heralded the welcome return of warm weather. There was no way Yultide celebrations were about to lose their popularity and hence the best thing to do was to remake the Yultide celebration into a Christian festival. This is why I see it as a European cultural festival.


I believe something similar may be going on in the festival of Diwali. With the end of Buddhist India the Kathina celebration was converted into a Hindu one with many changes of course.

Some Christians are rightly unhappy how the celebration of Jesus’ birth has become synonomous with debauchery and therefore dislike the term ‘Merry Christmas’ and prefer ‘Happy Christmas’. As a non-drinking celebrant I don't think my celebration of Christmas and such fantasy figures like Santa (with all his parallels to God) constitute bebasement of Christmas.

Thank-you for all your interesting blogs, with metta Jake.

On behalf of the National Library Board (NLB), we would like to invite you to pledge your blog to the Singapore Memory Project as part of efforts to collect memories that are already manifested in existing online channels.

The Singapore Memory Project (SMP) is a national initiative to collect, preserve and provide access to Singapore’s knowledge materials. Spearheaded by NLB, the SMP aims to build a national collection of content in diverse formats (including print, audio and video), to preserve them in digital form, and make them available for discovery and research.

By pledging your blog to SMP, you are affirming that every memory matters. Whether your posts are an account of your daily life, or an expression of your thoughts, the SMP hopes to find a home for your memories so that it can help build towards an understanding of Singapore. You will also receive a badge that you can display on your blog in recognition of your contributions.

Contributors to this blog pledging initiative will be listed on Singapore Memory portal’s blog pledging webpage. All blogs pledged to SMP will archived using NLB’s web harvesting software, in addition to images of each blog’s landing page.

If you are keen to pledge your blog to SMP, simply fill up our response form at this following URL: http://singaporememory.simulation.com.sg/Public/Pledge.

You may find out more about this initiative at http://www.iremember.sg/?page_id=2822.

We are looking forward to your contribution.