The English-Australian monk Abhinyana died on the 14th of April this year at his sister's home in Nambour, Queensland. In the ten days before his passing we exchanged several emails each day. In one of these he asked me to write a short introduction to Parting Shots, his last book, which he was then finalizing and I agreed to do so. I have just received a copy of it. This is what I wrote.
The book you hold in your hand is written by someone who has reached that time which we will all come to sooner or later - where the portion of life is about to end and a new one begin. For some, that time will be brief and comfortable, for the writer it is proving to be drawn-out and difficult. Like so much in life, we cannot chose which of these two we will have. There is however, one thing we can choose - how we spend that time. The Buddha said; ‘Train yourself like this, “Though my body be sick, my mind shall not be sick.’ ” I know that Abhinyana’s body is sick, very sick, ‘in the grip of an octopus’, as he puts it. But reading this, his summing up, it is obvious that his mind is still as clear and sharp as ever. And as always, he writes with honesty and directness. He clarifies the Dharma and urges his readers to give up the superstitions that infest so much traditional Buddhism and return to the simple, straightforward and commonsense teachings. That old piquant sense of humor is still there too, poking fun at others’ foibles as well as his own. What is missing is regret, maudlin reflections and ‘if onlys’. I assume this is because Abhinyana doesn’t have any. If you can face your end as you lived you life then you are doing okay. Abhinyana and I first met years ago, our paths diverged, met again and again went off in different directions. Now we have come together once more, this time via the internet, and are soon to part for good in this life. I don’t know if he will take with him anything I was able to give him. But I do know that I will long retain some of the things he gave me - an uproariously funny story, a barbed-comment that brought me back down to earth, a new angle on one of the Buddha’s sayings, genuine if sometimes difficult friendship. To all of us he gives these ‘parting shots’. 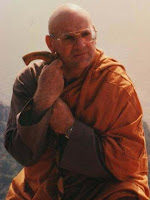 Posted by Shravasti Dhammika at 12:02 AM

Bhante, was it intention to write your post twice at once?
It seems that something is missing for that what is double.

Dear Wilfried, yes that was a mistake and I had missed it. Thanks for pointing it out.

Thanks for the reminiscences of Ven. Abhinyana. We knew him in Bataan, in the PRPC where he was indefatiguable on behalf of the Vietnamese refugees. His campaigns against the outrages of evangelical Christian groups were the stuff of legend!

An oft-quoted remark of his: "Another piece of experience? No thank you. I've had enough."

Here's a link to the book:

Thank you, Bhante, for your website. I've found much to ponder, as well as to chuckle at. Keep up the good work!

Is this the same Ven. Abhinyana who was a staunch, strict vegetarian?

Ok, thanks Holly for the link, I see it is the same Ven. Abhinyana I was thinking of.