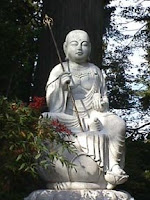 According to Mahayana, Ksitigarbha Bodhisattva has made a vow not to attain enlightenment until all beings have managed to get out of purgatory. To this end, he descends into purgatory and experiences all its pain and suffering just so he can teach the Dhamma to the beings there. In the Far East, Ksitigarbha is depicted as a monk with a gently smiling and serene countenance holding a kakarakkha (wayfarer's staff) in one hand and a wish-fulfilling gem in another. Images of him are often to be seen in cemeteries.
In Thailand and Laos there are many stories about an arahat named Phra Malai who is supposed to have come from Sri Lanka. According to popular legend, Phra Malai uses his supernormal powers to go into purgatory to teach the Dhamma with the same motives as Ksitigarbha. Generally I don’t have a very high opinion of popular Thai Buddhism but this is one of its manifest

ations that I do appreciate. It is interesting to consider the difference in the mentality and culture that produced the legend of the wrathful deity who condemns beings to eternal hell without hope or reprieve, and the ones that gave rise to the legends about Ksitigarbha and Phra Malai.
A study of the Phra Malai legend has just been published called Thai Telling of Phra Malai-Text and Rituals of a Popular Buddhist Saint by Bonnie Brerton. It is not particularly interesting (all anthropology, no Dhamma), but it will give you some idea about the beliefs and stories surrounding Phra Malai.
Posted by Shravasti Dhammika at 12:02 AM

Once I heard a zen story:
A student asked his Zen Master, 'Reverand, where will you be going in your next life?'

Master Reply, 'I will go to hell.'

Student was shocked, 'But... but you have so much virtues and you have guided us tirelessly. I couldn't believe...'

'If I'm not going to hell. Who will be teaching you then?' Master replied.