I love relics, not because I 'believe' in them (if you ask me, 99.99 % of all relics are fake) but because of what they tell you about how people used to think, and in some cases still think. The piety and the incredulity, the devotion and ghoulishness, the mite of the simple folk and the crass commercialis 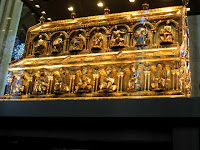 m of the clergy have always fascinated me. So naturally, when I was in Cologne with a two hour wait for my connecting train I nipped out of the station and into the cathedral to see the famous Shrine of the Three Kings, the Magi which legend says came from the East to offer gifts to the baby Jesus. St Helen is supposed to have found the bones of the three kings during her famous pilgrimage to Palestine (She found the True Cross too. How's that for luck!). She had them deposited in Hagia Sophia from where they were later moved to Milan and later in 1164 Fredrick I had them transferred to Cologne. It was the influx of pilgrims to the shrine that turned Cologne from a town into a city and the donations they made built the cathedral, the biggest (and if you ask me, the ugliest) in Europe. I spent 20 minuets gazing at the exquisite golden coffins, then I sat back and observed the other visitors. How things have changed! Once pilgrims from all over Europe came to reverently worship the kings' bones and go away with their faith rejuvenated, and often healed of prolonged sicknesses into the bargain. Now tourists in T-shirts and shorts gawk, take photos and laugh at the idea that the bones could be genuine and that people were once so naive that they could feel devotion in the presence of dusty old skulls, tibias and fibulas. That’s the trouble with conventional religion - it raises you up with one hand and lets you down (if you can't 'just believe') with the other.
And admittedly a list of the relics that used to be revered in Christendom is enough to make you laugh - there were two tombs of the three kings (the other was in Saveh near Tehran), a tip of Satan's tail, a feather from the Archangel Gabriel's wing, a crystal vial containing the Virgin's milk, another vial containing Jesus' breath, six heads of John the Baptist, five arms of the Virgin Mary and of course we must not forget the Holy Prepuce, of which at one time there were eight. If you don’t know what a prepuce is look it up in the dictionary.
And if any of my Western Buddhist readers are feeling a bit smug they might like to put down their copy of the Kalama Sutta and be informed that there is a temple in Thailand enshrining what is known as Phra Singanig, the Holy Snot. That’s right, the Buddha's nasal mucus!
Posted by Shravasti Dhammika at 12:01 AM

You seem to have hit a very interesting point with your observation of the opposing reactions to modern people seeing relics. They seem very sceptical and mocking of those who remain devout.

I wonder if something is lost when people become too "clever" to see a bit of the sacred, or some mystery in life. Folk religion may have been a bit naive, but it seems that people had a sense of wonder that is lost now. The environment is now only seen through the eyes of human utility, where once it used to create this sense of awe and it held some of the most deep respect.

Could you speak, in some small way, to this understanding of the sacred in the mundane, that used to refresh so many, and what happens when it is lost?

Thank you for your insights. It is a useful tool for those of us living too far from any Theravadin Monk to feel a real connection with the Path that we've chosen.

Dear Sharidan,
You have broached a very important and interesting issue. Early next month I will give you some of my thoughts on Dhamma, spirituality and the sense of wonder.

I've been reading your musings since T Y Lee recommended your site last July. I was very impressed and went back to your first musings. Your thoughts hit home with me and I thank you very much!

I had twelve years of Catholic education and I was surprised I had to refer to the dictionary for Holy Prepuce. It must not have been one of the many relics I had hanging from my neck as a youth.

Thanks for your insight and I look forward each day to your musings.