In some ways Singapore is very much in the 21st century and in others it is somewhat behind - in inter-religious dialogue for example. Despite the government's best efforts to promote it, the country's different religions don’t talk to each other very much. As usual, the Catholic Church goes out of its way to promote inter-faith understanding - in fact on the 10th of this month I have bee

n invited to address a seminar at the Church of St. Mary of the Angels, an invitation I was honored to receive and to accept. To be honest, Buddhists don’t really do very much to promote inter-religious harmony, but their lack of an aggressive conversion agenda and their general tolerance does nothing to endanger it either. One person who has consistently worked for inter-religious dialogue over the last 23 years is Venerable Pannadharmvides of the Ananda Maitriya Temple in Bukit Merah. On the 12th of last month Singapore's Inter-Religious Organization awarded him the orginization's prize for promoting trust amongst peoples of different faiths and ethnicities. 'His calm nature and pleasant personality won him the trust, respect and affection of his inter-faith colleagues' the IRO citation said. Ven. Pannadharmvides, who is now 79 and has been in Singapore for more than 50 years, is one of those people who is very easy to like; gentle, smiling and genuinely courteous. Apparently he was born in the far south of Thailand where most of his neighbors were Muslims. This, plus his understanding of the Dhamma has always made him open and accepting of other faiths. Congratulations Chao Khun. 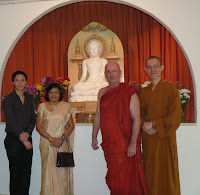 the First Secretary for the official launching of my book Sacred Island - A Buddhist Pilgrim's Guide to Sri Lanka. Miss Samarakone, who takes a deep interest in her country's religious history, was delighted to receive a copy of the book, signed by yours truly. My good friend Ven. Chuan Guan and a crowd of about 90 people also attended the function.
Posted by Shravasti Dhammika at 12:03 AM

I have no idea how to contact you through e-mail but I need your help to clarify the below. Hope I am not rude by posting this question here not related to your article.

Jina panjara is a Gatha that request the Buddhas and Arahant and many Suttas to protect the person that chant or the person chanting for, right?
So there are some pronouns that are mix up and I don't know which is which.
And making the matter more confusing, some stanzas don't even have pronoun but the translation (English) has.


Translation for myself: May the Buddas rest on my head; the Dhamma, on my eyes, the Sangha, the abode of all virtues, on my shoulders.

Here is the confusing part

Sire patitthitâ Buddhâ (which one here is myself? because both is the same)
Dhammo ca tava* locane (this is obvious tava is yourself; mama is myself)
Sangho patitthito tuyham* (this is also obvious)
ure, sabba gunâkaro


Ok lets go to another one
Stanza 4

both yourself and myself use the same scriptures...arghhhh...I am confuse.

I want to make a very clear if I want to chant for others.

Dear Jin Chong
I have passed your inquiries on to my good friend Ven Anandajoti. He says, 'Many times in Pali, pronouns are not stated, because the context makes it clear, except in a few crucial cases when it must have been clear to the authors but not to us'. You can consult his careful word for word translation at http://www.ancient-buddhist-texts.net/Texts-and-Translations/Safeguard/05-Avasanam-03.htm The verses themselves are probably a 19th century Thai composition. Surely you could find something more edifying and useful to translate. 'The Buddha on my head'? What we need is the Dhamma is our heart!