While trying to identify the plants mentioned by the Buddha one Pali name that stubbornly eluded its Linnaean nomenclature was maluva. This was particularly frustrating because the Buddha mentions the maluva creeper so often and in several important context (e.g. Dhp.162; 334; S.I,207). Then my Polish correspondent Piotr Jagodzinski drew my attention to an article written on

this very plant some 35 years ago, which included its Hindi name and I finally had it. The maluva vine so often mentioned by the Buddha is the Camels Foot Creeper, malu or chambuli in Hindi and Bauhinia valhii to botanists. It is the largest creeper in the Indian forests, an evergreen with soft porous wood, velvety rusty-colored shoots, paired tendrils and creamy-white flowers. The leave are downy beneath and have two rounded lobes on the end giving them the shape of a camel's footprint and hence the plants English name. These leaves were pinned together with small splinters and used as plates (Ja.V,389) and they still are. If you have ever brought some alu subji on an Indian railway platform (a culinary delight I do not recommend!) it was probably handed to you in a disposable plate made of maluva leaves. The big woody pods burst open in the summer heat, the seeds can be eaten and the strong rough fiber in the bark is used to make ropes.
Despite its usefulness, the Camels Foot Creeper causes great damage to forest trees, twining around them and stunting their growth and sometimes killing them (Ja.V,452). It is, the Buddha correctly observed, a fast-growing plant (Dhp.334). In the Jataka a man described his lover as 'clinging to me l 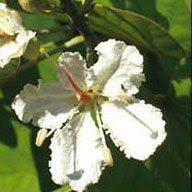 ike a maluva creeper' (Ja.V,215). The Buddha said that passions spread the was the maluva creeper spreads through the forest (Sn.272). On another occasion he used this plant in a parable in which he warned that although sense pleasures may give immediate satisfaction, they can cause problems later. 'Imagine in the last month of the Summer that the pod of a maluva creeper bursts and seed drops at the foot of a sal tree... Being fertile and not being swallowed by a peacock, eaten by an animal, destroyed by a forest fire, carried away by a forester or destroyed by termites, it was eventually watered by the rains, sprouts and put forth a soft downy shoot w 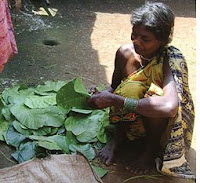 hich wound around the sal tree. The spirit living in the sal tree thought, "The touch of this maluva creeper is pleasant". But in time the creeper grew around the tree, made a canopy over it and draped a curtain all around it and broke its branches. And then the spirit of the sal tree thought, "This is the coming danger. Because of this creeper I am now experiencing painful, racking, piercing feelings"' (M.I,306).
So be careful that the maluva creeper of sensual pleasure doesn't get a hold on you.
Posted by Shravasti Dhammika at 12:16 AM

I always find it very interesting to read of your Indian themed articles- it produces a big craving in me to revisit the Sub Continent. I must get rid of the craving.......

I have been reading selections from the Mahjjima Nikaya and came across the passage comparing "a woman's soft, downy arms" to the soft, downy tendrils of the maluva-creeper vine. It is one of the vivid and colorful metaphors that make reading the suttas so entertaining. But it did make me wonder about the vine, so I am glad to see this explanation of what the vine is! It sounds like it is very destructive to trees. But it's also a very useful plant, it seems! Unless you are a tree, that is.