Did Jesus Live In India? II

In 1908 Levi H Dowling published The Aquarian Gospel of Jesus the Christ which he had been able to download from the 'akasic records' and which included a chapter on Jesus' life in India. The book only circulated amongst a few theosophists and other cranks. But in 1926 a newspaper in America reported the discovery in a monastery in Tibet of a lost Life of Saint Issa, Best of the Sons of Men ( a rehash of Notovitch's story), other papers, first in America and later overseas, took up the story and it came into popular consciousness again. This pumped a bit of life into the myth and allowed it to hang on until the 1960's. With the growth of the New Age movement in that decade the 'Jesus lived in India' myth really became firmly established (we could call it an 'urban myth' although I think its quite popular in rural areas too).
Since then a small and rather profitable industry has developed around the myth. The

re are more than two dozen books dedicated entirely to the subject, many others allude to it as fact and there are literally hundreds of articles about it. There are several pseudo-documentaries about it too. We even have authentic pictures of Jesus during his Indian sojourn - meditating, backpacking through the Himalayas and on the cover of Elizabeth Clare prophet's book staring wistfully at Lamyuru Monastery in Ladakh, founded in the 10th century CE, a thousand years after Jesus. Recently a Jesus Thanka, a Tibetan painted scroll, has been 'found' (it was only a matter of time I suppose). A quick examination of this thanka, particularly the careless and hasty brush strokes on the outlines and the use of chemical pigments, shows that it was painted by one of those artists from Katmandu who knock out fake thankas for tourists. I would date it circa 2000.
With each new publication more 'facts' come to light, more details are 'discovered' and more sayings of Jesus emerge, so that now the account of his life in India is longer and more well-documented than his life in Palestine. Here are some of the more popular books on the subject. King of Travelers - Jesus Lost Years in India by Edward Martin, The Lost Years of Jesus Revealed by Charles H Potter, Jesus Lived in India by Halgen Kersten, Jesus In India by H. N.G. Ahmed, Jesus of India by Maury Lee, Jesus in India by James Deardorff (by this stage authors are struggling to think of titles that do not contain the words 'Jesus,' 'lived' and 'India'), The Mystery of Israel's Ten Lost Tribes and the Legend of Jesus in India by J. M. Benjamin, A Search for the Historical Jesus by Fida Hassnain, Jesus in Heaven on Earth by K. N. Ahmad and Christ in Kashmir by Aziz Kashmiri.
Now you have to admit, this is rather fascinating. More fascinating still is that there is not an iota, not a shred, not an atom of evidence that Jesus ever left Palestine. Not one inscription, not one fragment of ancient parchment and not one 'legend' or 'account' that can be traced back before the late 19th century. There isn’t even a puff of smoke and a few mirrors.

Indeed, the evidence that Jesus even lived in Palestine is scarce enough. Nearly all historians accept that there was a person called Yehoshua (Joshua) of Nazareth (Jesus is an Anglicized pronunciation of the Greek attempt to say Joshua. An equivalent of this is if the English had gone to Thailand in the 17th century and had attempted to say the Thai pronunciation for 'Buddha' which is something like Putowar, and we today were calling the Buddha Putohyouare) who attracted attention sometime between around 29-35 CE. But curiously, the earliest documents to mention Jesus, the letters of St Paul, (a man who never met Jesus and whose letters make up nearly half the New Testament) contain hardly a single quotation of Jesus. The four Gospels date from between 35 and 70 years after the death of Jesus and no scholars consider them to be written by the direct disciples of Jesus or to be eyewitness accounts. That somebody named Jesus lived, taught and attracted attention there is little doubt, that he went to India there is no more evidence than that he went to Newfoundland, Outer Mongolia or Polynesia.

Except for Dowling's 1908 'akasic records' all the early books on Jesus in India relied on statements like 'it is widely believed', 'in Kashmir ancient tradition says', 'historians think it is possible that', i.e. they make at least some pretence at drawing on ancient evidence. But as the myth has become more accepted 'evidence' is asserted as if it were general knowledge. The confidence with which this is done doesn't even bother to take into account genuine and well-established facts. Swami Satyasangananda of the Bihar School of Yoga in his book on Indian gurus, for example, writes that Jesus studied at Nalanda, disregarding the unimpeachable fact that Nalanda wasn’t founded until about 350 years after Jesus death. But hey! We're talking about belief here and when belief takes up the front see seats facts sit at the back. 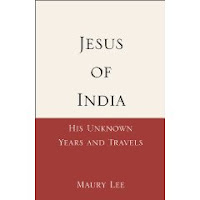 Outer Mongolia! Say, I've got an idea for a book...

I am so enjoying this series of posts. And I agree about the difference between consciously concocted fraudulence and the organic nature of "true" myth. Of course, India is not the only place the peripatetic Jesus, that early world traveler, seems to have appeared. Blake's poem "Jerusalem" takes as subject the myth that the young Jesus had visited Roman Britain:

"And did those feet in ancient time
Walk upon England's mountains green?
And was the holy Lamb of God
On England's pleasant pastures seen?"

Rather than one book about one country, I suggest a series about his world tour, with one book per country.

Some musings on mythmaking: From what I remember reading about Blake he was not dissimilar to that Dowling or other indeed other visionaries (or cranks): Blake had visions, spoke with angels, etc. He may even have believed in the fantastic worlds, stories and creatures he created in his poetry. So I wonder what the difference between 'fraudulent' myth-making and 'organic mythmaking' actually might be. I suppose that one major difference between Blake and Dowling is that Blake was much the better writer. And I guess that most readers are able to take Blakean myth merely to be a vehicle for his poetry - which means that Blake (unlike Dowling) didn't try too hard to make a truth claim (i.e. something like 'this is REAL, folks').

An afterthought: Maybe it depends on the type of media used, 'literary fraud' is of course a major keyword in yesterday's thread.

But I don't think that 'manufactured myth' is the least interesting type of myth. The two postings on Notovich, Dowling and those who came after them certainly make fascinating reading.

But I agree with bhante that it's important to be critical - some stories sometimes are just too good (or weird) to be true. Or to be taken literally.

Fraudulent mythmaking and the organic variety? Blake's visions were 'real' in the sense that he genuinely believed that he was having visions. As for Dowling we can no longer say. But certainly some myths have their origin in conscious fraud and that distinguishes them from the 'Blake' variety. Incidentally, the myth that Jesus frolicked in England's green fields goes back to the Middle Ages. Personally I believe we ultimately have to distinguish between myth and historical reality because myths grow out of imagination and desire and thus can be colored by the beauty and the evil that both these mental states can contain. Take the Buddha's mythical journey to Sri Lanka. Sounds innocent enough. But it has long been and is still being used to justify some very nasty things. In fact, it probably originated in longing for some physical proximity to the sacred and the desire to exclude and dominate the 'other'. Play with myths, delight in their stories, but where possible, always set your course by good, solid, concrete, verifiable Truth.

Interesting post. But I have a question about this item: "More fascinating still is that there is not an iota, not a shred, not an atom of evidence that Jesus ever left Palestine." Are there not biblical references to Mary and Joseph escaping Palestine with Jesus, fleeing to Egypt to avoid the murderous Herod?

The book here written by teh Imperator of the ROSICRCUCIANS(ROSY CROSS_AMORC) states that Jesus traveled to Greece,Egypt,Persian,India and Tibet,during his 18 years missing sojourn.There Rosicrucians are said to be connected with Jesus via the Essenes