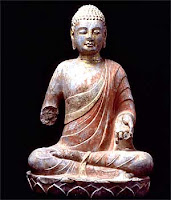 In 1996, the Chinese made one of the most important archeological discoveries in the history of their country. While a school sports field was being excavated some 400 stature of Buddhas and bodhisattvas came to light. A find of so many statures was rare enough but these ones were exceptionally fine, in fact the amongst the finest ever produced in China. Many of the statues still had the original paint and gold leaf on them, albeit fragmentary and faded. But it is the faces of these statues that make them so special. Each has a smile so loving, so gently benign, that it captures almost perfectly the enlightened state. As yo

u gaze into these beautiful faces you can hardly believe that you are actually looking at stone and not at warm living flesh. I was reminded of Upaka's words on first meeting the Buddha, 'Friend, your senses are serene, your complexion is radiant and bright. Under whom have you become a monk?' (M.I,170). Archaeologists have speculated as to why there beautiful statues were originally buried. The most likely explanation is tha 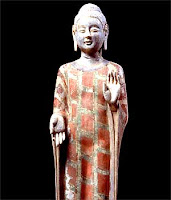 t they were old, were to be replaced and being too sacred to just dump somewhere, they were buried, as one would an actual person.
Last Saturday afternoon, Thirananda, Samata, Yi Rong, Min Than and his mum, Padma, Viraj and I went to the Peranakan Museum to see 35 of these exquisite sculptures which are on display there. The exhibition is appropriately called Serenity In Stone and is really worth seeing. The Buddhas and bodhisattvas left me feeling quite peaceful and that night I had a particularly good meditation. 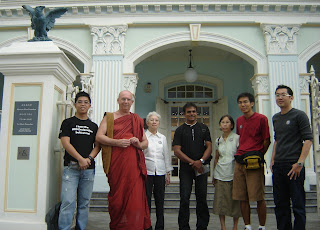 Singapore used to be a bit of a cultural wilderness, but not any more. Every few months one or another of the city's museums puts on a world-class exhibition, this one, for me at least, being the best so far. Of course there are still a few creases to iron out. I couldn’t help notice several clangers in the Gallery Guide to the exhibition. Shakyamuni is not 'one of the names of the historical Buddha, another is Siddharta Gautama.' It is of course a title meaning 'the Sakyan sage.' Saying that the Gupta period went up to the 7th century is stretching it a bit and Buddhist sculpture flourished in Mathura under the Kushan rather that the Guptas. But they're new at it so we'll be indulgent.
The exhibition is at the Peranakan Museum, 39 Armenian St and continues until it the 26th of April. They're even allowing people to meditate in the gallery every Wednesday evenings between 7.30 and 8.30 pm. What a creative idea!

Posted by Shravasti Dhammika at 1:16 AM