I Want My Mummy!

Mummified monks are apparently quite popular in Thailand, Vietnam and in China too, although less so. The Tibetans have or at least did have until the Red Guards destroyed them, a few mummified rimpoches and lamas too. Some of the saints in Catholicism are deemed to be 'miraculously uncorrupted.' I don’t know what Communists call the mummified remains of Lenin and Mao, although when I saw the Great Helmsman back in the early 80's he looked decidedly 'waxy'. 'Do Not Expose To Naked Flame!' Singaporean Buddhists returning from travels in Thailand sometimes ask me what I think about or how I can explain the mummified monk they saw while they were there. I always tell them that amusing story about Ramases II. 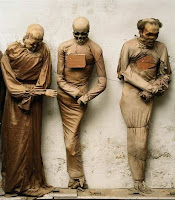 Ramases was the greatest of all the Egyptian kings, perhaps the greatest ruler of all time. His many titles included 'Conqueror of Syria', 'Subduer of the Hittites' 'Conqueror of Nubia' and the fact that he reigned for 66 years alone qualified him to be called 'The Great.' It is even thought by some that the 'Pharaoh' mentioned in the Old Testament is Ramases. When his mummy was discovered in 1881 it was shipped off to England. When it arrived at Tilbury the customs officers had to charge some duty on it but they didn’t know under what category it should be classed. Finally, Ramases II, King of Kings, was categorized under and charged duty as dried fish. 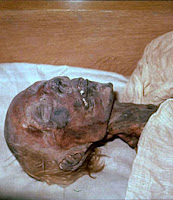 The top picture is of Thai Buddhist dried fish (What's he need the sun glasses for?), the second is of the Sicilian Catholic variety and the bottom one is the original 'King of Kings' brand.
Posted by Shravasti Dhammika at 2:31 AM

Oh lord, you just made me laugh so hard I scared the cats.

There's a lama in Buryatia whose body hasn't decayed at all in 80 years, sans mummification.

Thanks for the info about Dashi Dorzha Itigilov. I have read that the bodies of esteemed Tibetan and Mongolian lamas were buried in salt. An account of the internment of Chogyam Trungpa mentions this. The color picture of Itigilov's body in the link you have given us would seem to verify this. AND STOP SCARING THE CATS!

I once watched a Discovery Channel program on mummies around the world but I am not sure if the one with the sunglasses was the one featured in the program. According to the scientists, some lizards or reptiles have burrowed in the eye sockets, hence the sunglasses; otherwise the body is quite well preserved. Days prior to death, the monk will abstain from eating and will drink only salt water, as a means to remove the bacteria in the gut which caused the body to decay.

The mummified monk is such a contrast to Venerable Sheng-yen, who wanted his ashes to be scattered in the sea.

Dear Guek Har
I love people who think, mums warm me and I resonate with people who read as much as you obviously do. Thanks for the comments.

dried fish! lol :D thanks for the laugh. very unmystical and down-to-earth

Thank you Venerable, we first met some 20years back ;-) at the then Nanyang Technological Insititute where I studied and you gave talks. I am glad to find Dharma online! I read your earlier posts relating to Hell and Euthanasia and am currently reading this book about Samsara and the depiction of Hell (http://blog.thmz.com/UploadFiles/2008-3/8152367637.jpg). Can you advise some books to read?