A Tree Grows In Singapore

I have just finished the second volume of Lee Kuan Yew’s memoirs From Third World to First. At 778 pages it’s quite a read and volume one is almost as long. Lee knew or met almost every world leader from the 1950’s onwards and his book contains interesting and sometimes amusing cameos of some of them. Katherine Frank wrote of Moraji Desi that he ‘had all of Gandhi’s fads and none of his virtues’ an impression confirmed by Lee. He writes, ‘In December 1979, in the car taking us from Delhi airport to the Rasthrapati Bhavan, he said that thousands of years ago Indians had made a space journey and visited other planets, which the Americans were then doing. I must have looked skeptical, so he emphasized, “Yes, it’s true. It is by reincarnation. It’s recorded in the Bhagavad Gita."’
Singapore has long been ridiculed for its various campaigns to change its citizens’ behavior – the flush the toilet campaign, the don’t spit campaign, the be polite campaign, the don’t litter campaign, the don’t chew gum campaign, the say 'thank you' campaign, etc - but Lee defends these campaigns convincingly. ‘They laughed at us. But I was confident we would have the last laugh. We would have been a grosser, ruder, cruder society had we made no effort to persuade people to change their ways. We did not measure up as a cultivated, civilized society and we were not ashamed to set about trying to become one…It has made Singapore a more pleasant place to live. If that is a ‘nanny state’ I am proud to have fostered one.’ Who could argue with that?
But being a tree-lover (not ‘hugger’ please note), it was the 13th chapter ‘Greening Singapore’ that interested me most. After two months in India your eyes crave to alight on something clean and green. Bangkok’s last pathetic trees are slowly chocking to death in the smog. There is a suburb of Colombo with the lovely name of Cinnamon Gardens. Even in the 70’s it was still a bit green and shady. Now it’s all asphalt, grime, billboards and glare with hardly a tree in sight. Singapore by contrast gets greener every year. Lee describes his determination to make Singapore a garden city, how he brought in experts to test the soil to find out how to make the grass grow greener, how he carefully selected trees that would not just grow well in the Singapore climate but also flower and the early tree-planting campaigns. Now Singapore even has ‘heritage trees’ which can’t be chopped down and recently they even slightly changed the route of a new highway to save a lovely old tree.
This is Jalan Dusan, just across the road from me, a fairly typical shaded, tree-decorated Singaporean street in a heavily built-up area. 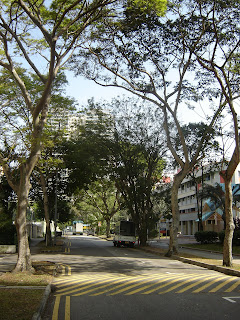 A little further along is the Pan Island Freeway. Just imagine what this would look like without the trees and the trimmed hedges! 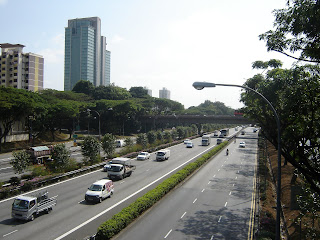 This is East Coast Freeway. 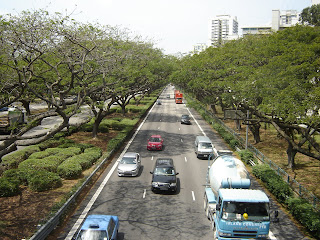 No barren paved parking lots in Singapore! All of them are shaded with trees, like this one covered with orchids and moss. 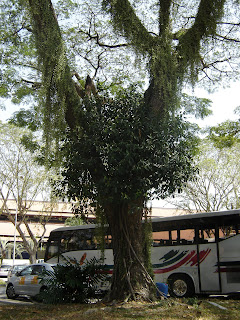 And this is my favorite Singapore tree and I think the biggest in the country, a true ‘forest monarch’ (vanaspati), to use the Buddha’s term, the majestic Ceiba pentandra growing in the Botanical Gardens. 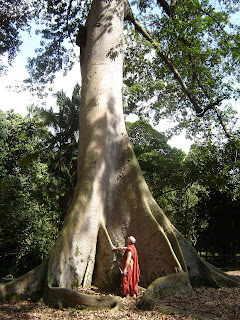 Posted by Shravasti Dhammika at 12:35 AM

Thanks for your pics of Singapore! I visited there twice last year when I was on deployment and absolutely loved it, seeing Sentosa, Chinatown, Little India, and other places downtown. I would have liked to seen more placees, if I had the time. There is a small US Navy installation there, and hopefully someday I can get posted there!

Dear Lt. Shin,
Thanks for the comments which prompted me again to have a look at your interesting blog. Next time your in the Lion City do contact us.

Can I have your permission to "copy and paste" this posting to my blog, with due credit to you?

Dear Justin,
Please do. Next time no need to ask.

Nice to see you here. Singapore is small but is great in many things. It is near to Malaysia and yet so far. Hahaha.