I was very sad to hear that Venerable Master Sheng-yen, one of the Taiwan's most respected Buddhist monks died last Tuesday at the age of 80. An innovative and forward-looking monk he had an important role to play in the revitalization of Ch'an Buddhism in Taiwan and amongst both Chinese and Westerners outside Taiwan. Ven. Sheng-yen, had been sufferin 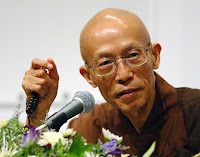 g from kidney disease for some time. The president of Taiwan said he was 'saddened and shocked upon hearing the new' about the death of Sheng-yen, who he said was 'good at using language to touch people'… 'The concept of spiritual conservation he advocated is not only religion but philosophy and attitude of living', the president said, referring to the Sheng-yen's gentle insistence on living in peace and simplicity. In 1998 Ven, Sheng-yen was named by the popular CommonWealth Magazine as being one of the 50 people who have had the greatest influence on Taiwan over the past 400 years. As a Ch'an master, he taught a number of celebrities, including Chinese martial arts actor Jet Li as well as Lin Hwai-min, founder and artistic director of Taiwan's Cloud Gate Dance Theatre.Ven. Sheng-yen was born in Jiangsu province in China and became a monk at the age of 14. He joined the Kuomtiang army in 1949 and fled to Taiwan with the Kuomintang after their defeat by the Chinese communist forces at the end of a civil war. He became a monk again in 1959 and trained in solitary retreat for six years in southern Taiwan. He completed a master's degree in 1971 and doctorate in Buddhist literature in Japan in 1975. Ven. Sheng-yen became abbot of Nung Chan Monastery in Taipei in 1979 and the International Cultural and Educational Foundation of Dharma Drum Mountain which he founded in 1989 now has centres all over the world. May he attain the peace of Nirvana.
Posted by Shravasti Dhammika at 12:39 AM

Bhante,
Did you know he wrote a Buddhist QA book with the widespread popularity similar to your GQGA, in the mahayana group?
I happened to learn the C'han method under his lineage. It was a bit shocking when I knew this and reminds me of DN16.6.11.

Hi, I'm Yen Feng from The Straits Times and came across this post on your blog. I cover religion for ST and would love to speak to you more about how Ven Sheng-Yen has inspired you.
How would I get in touch with you?
You can e-mail me at yen.feng@gmail.com

I, too, was saddened when I heard the news about Master Sheng-Yen. His book, Getting the Buddha Mind, was the first Buddhist book I read, and it was instrumental in my following the Path. I never met him, yet his teaching touched me deeply.