Some years ago I began thinking about the need for Dhamma material for kids and this finally resulted in a series of children's' comic books called Great Buddhist Stories. My friend Susan Harmer did the pictures, which took her many months of eye-squinting, work while I wrote the text which took roughly a day per book. Great care was taken to make sure the stories were as close to the original texts as possible and we also tried to have costumes, architecture, etc close to how they were at the Buddha's time. I defiantly wanted to avoid the 'late Rubaiyat' style that seems to predominate in modern Western depictions of the Buddha's life. 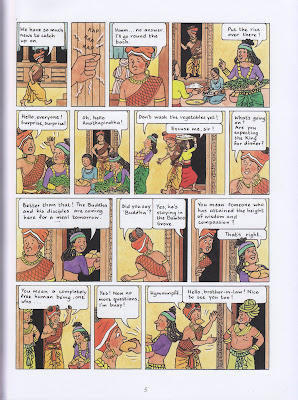 The books were launched with much fanfare by the publishers and initial sales were good but now they have leveled off. Heroic efforts to let various Buddhists temples, groups and organizations around the world know about the books has led to some interest, but not much. It’s a bit disappointing. Of course, it may be that the books are not as great as think they are but I have a sneaking suspicion that that old scourge Buddhist indifference is operating here. Since Great Buddhist Stories came out then I have collaborated with the well-known Sri Lankan political cartoonist Vini Hetigodha on another children's Dhamma book, now available in English and Sinhala from the Buddhist Publication Society, and also with another artist on a comic book on the life of the Buddha, available only in Sinhala. I've done my bit. 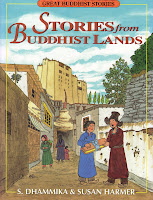 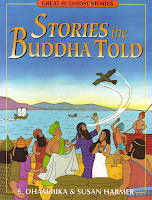 If you want more information about Great Buddhist Stories ring (65)62139300, Fax (65)62854871 or email te@sg.marshallcavendish.com. The online bookstore is at www.marshallcavendish.com/genref.
From the 1st of next month I will be looking at little-known or forgotten Buddhist communities around the world.
Posted by Shravasti Dhammika at 12:03 AM

My children have several of your Buddhist comic book stories and have enjoyed reading them very much--I heartily recommend them to other blog readers. Their favourite story is the one where the meditation student meets the mystic who has spent years learning to levitate. The mystic proudly reveals that he can float across the river and the student replies that he thinks the mystic has wasted his efforts as there's a bridge right over there!

With my children, I think the most important thing is talking about ethical issues and in those discussions I bring up the Buddhist perspective. Besides the comic books, I also have a book by Ajahn Brahm with little one page 'homilies' -I can't remember the name of the book-that I have read with them. They're not especially written for children but many of them are good for kids.

I suppose many Western Buddhists who want to leave the choice to their children grew up having religion forced upon them. When I lived in Singapore I occasionally brought my children along to Venerable Dhammika's Sunday morning -what to call it?-meeting. My son usually found something in Ven. Dhammika's talks that appealed to his scientific way of thinking or to his humour-or both!- and my daughter, who was quite young then, more enjoyed pleasing me, and the puja rituals of passing along the fruits and flowers, etc. Of course, the fact that we went to have roti prata or a "milo dinosaur" afterwards was part of the appeal.

My children went a couple of times with their friends in Singapore to the Baptist church Sunday school, which was pitched to them by their friends with "they give you lots of good food!" I felt the need to debrief them when they came home. According the worksheet my daughter brought home with her, they learned that it's good to help your parents around the house and do good deeds. I was seriously tempted to sign them up! (Not really, that's how they git ya'! : ) ) But I do think that some moral or ethical training is something that's lacking in many children's lives these days.

I'll probably enjoy them, and will present them to the nearest Thai temple. I surely will prefer them to the very disappointing animation movie "The Life of Buddha" (http://www.imdb.com/title/tt1039902/). Every time that movie has a chance to choose between a factual episode of the life of the Buddha, or a sound teaching of His, and a miracle, it chooses the latter. It starts with the miraculous, "pure" (that is sexless) conception of Siddhattha by Mahamaya by a spiritual white elephant sent by the gods, it goes on relating on the miracle of Sankassa and so on, while of course it neglects the episode of Him assisting the sick bhikkhu.

I just can't wait to put my eyes to a genuine and positive story of the Buddha, His life and teachings.

Hi,
These Comics seem to be illustrated very well.
I am a big Fan of COmics & a Vipasana Meditator too.
Where we can get these Comics in india..pls tell me.
mail me
prasana.raman@gmail.com

Dear Bhante,
After reading your blog in Feb., I called Marshall Cavendish to find out where the books are retailed. They told me 2 of the 4 titles are out of print and that I should be able to find the other 2 in Popular Bookstore. After visiting 3 outlets I finally managed to get Stories from Buddhist Lands from Kinokuniya at Takashimaya today. At first Kino staff checked their computers and told me they don't carry them. When I persisted telling them what the publisher said, one kind staff said she will to go to `another level' of the store (presumably their store room) to check. She returned with just this copy telling me that is all they have. I thought you would like to have this feedback.
I will carry on trying to get hold of the remaining 3 titles.