Making A Monkey Of Him

I have read a news item saying that some newspaper in America has published a cartoon comparing President Obama to a monkey or at least that the cartoon could be read in that way. Apparently some people are up in arms about this. I haven’t seen the cartoon but this is my thinking on such matters. When it comes to political humor, it's 'no holes barred.' Some humor might be tasteless, insulting, unfunny or downright moronic but that reflects on the comic or the cartoonist, not the target. I strongly disapprove of throwing shoes at politicians, but only if you miss. And as far as being likened to a monkey goes, I think that should be seen as anything but an insult. The Bodhisattva was often reborn as a monkey and in that embodiment he demonstrated resourcefulness, courage, self-sacrifice, loyalty, leadership and other good qualities. Monkeys are, depending on the species, intelligent, they have close family bonds, the females are caring mothers, the males will protect the troop with their life if necessary and all this is a lot more than some humans do. Monkeys have lots of sex too but that's not so much a virtue as a fringe benefit. If you really want to cause offence, call a monkey a human and see what happens. 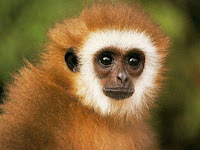 There are quite a few Jatakas that suggest that humans could and should learn a thing or two from animals, including monkeys. In the Garahita Jataka a monkey (the Bodhisattva) is captured, kept as a pet, eventually escapes and returns to his monkey companions. The other monkeys ask him what human society is like and he tells it as it is. '"This gold is mine!" "This money is mine!" Thus they wail both day and night. These stupid humans do not see the Noble Dhamma.' When the monkeys hear this and about the other things humans do they put their hands over their ears.' In the Tayodhamma Jataka the Bodhisattva as a monkey is praised in these words, which I would like to address to President Obama. 'One who has three things, as you have Oh Monkey King - skill, courage and wisdom - he will banish his critics.'
Ven. Anandajoti helped me translate these Jataka verses and any mistakes are purely his responsibility.
Posted by Shravasti Dhammika at 12:22 AM

Bhante-la: I know you're trying to make light of this, and that we Americans are a constant source of amusement to you, but try to understand that racial sensitivities are still pretty raw in my country. African Americans were constitutionally defined as 3/5 of a person until our Civil War, and civil rights protests as recently as 1968 featured a slogan worn by the black protesters insisting "I Am A Man." Obviously, with the election of Obama and other signs, we're evolving beyond the several hundred years of our history in which most of the majority white population deemed the minority black population somehow subhuman. Unfortunately we still have pockets of white supremacists who promote this dismal point of view.

Put the shoe on the other foot: let's say Australia elected its first Aboriginal Prime Minister and The Age printed a cartoon hinting his actions made him seem like some sort of drunken caveman. You think people would just laugh that off?

The secret of comedy, of course, is timing. Categorizing an ancient Egyptian mummy as dried fish? Funny (except, perhaps, for the arrogant British theft of other nations' antiquities). Suggesting in a major paper like the New York Post that the first sitting African-American president in an historically slave-holding country, in which its most iconic civil rights leader was assassinated not so long ago, is an out-of-control monkey that needs to be shot? Not so funny.

Just so everyone knows what cartoon is being referred to here:

Dear Konchog,
You are quite right in saying that I am making light of the matter - but only in the first part of my post. In the second part I am actually attempting (desperately and perhaps unsuccessfully) to salvage at least something positive in the miserable affair. I am 'just a simple monk' but I'm not that simple that I don’t understand the deep offence caused and perhaps even intended. I take full cognizance of your comment about 'timing.' There are times (or situations) where even humor should keep its mouth closed and let seriousness deal with the situation. And you are right in saying that this is one of them.

It wasn't an offense, the monkey was to depict the US Congress as being ran by a bunch of wild monkeys.

Anyway, about Obama, which human being is so full of vanity and conceit as Obama? Obama is extremely arrogant, proud and boastful. I am glad he is not doing so well in the job he boasted a year ago as being this great hope who will heal the world as some kind of secular messiah. So much hot air from a politician!