The Buddha In The Bar 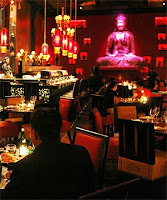 There is a minor uproar going on in Jakarta right now. The up-market French bar and music lounge franchise Buddha Bar has just opened a branch in Jakarta. On Thursday dozens of Buddhist college students sealed the exclusive bar and restaurant after negotiating with the bar's management. 'We've sealed the Buddha-Bar and it will remain closed until the matter is resolved. The management team has also agreed not to open the bar', Indonesian Buddhist Students Association (AMB) representative Widodo said. According to Widodo, the Jakarta administration had issued a letter to France regarding protests.
The bar's local management who had also filed a request for a name change, said 'Until the issue is resolved, the bar will stay shut'. The AMB's protest against the Buddha Bar is based on the group's dissatisfaction at the bar's use of Buddhism in a way that they perceive to be disrespectful to Buddhism. 'The name 'Buddha', Widodo said, carries sublime meanings that are not appropriate to be paired with words like 'bar' that are associated with venues where alcohol is served and where people get drunk. The bar itself is also filled with Buddhist symbols and artifacts. Its presence is offensive to the Buddhist community in Indonesia,' he said. Buddha Bar Jakarta branch is the George V Hotels and Resorts chain's first restaurant in Asia, following successes in London, New York, Dubai, Sao Paulo, Kiev, Cairo and Beirut.The Jakarta police told a group of protesters on Friday that it would summon the owner of the Buddha Bar for questioning over its alleged blasphemy. If proven guilty, owners of the restaurant could face up to five years imprisonment. 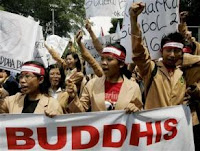 I am happy to say that so far the Buddhists have conducted their protest in a measured and non-hysterical way. As for the bar's name and its use of a Buddha statue are concerned, I am in two minds. Associating the Buddha with alcohol and indulgence is quite inappropriate (See my post of 9, 9, 2008). On the other hand, if they made a few minor adjustments I think the place could become genuinely and authentically Buddhist and then they could rightly use the name. They should do this - (1) make everyone entering the bar shave their head, (2) drop the prices of everything so they were the same as items at McDonalds, (3) have these words be printed in large letters on the bottom of the menu, 'What will the food you are about to eat look like tomorrow morning when you go to the toilet?' (4) require everyone to share part of their meal with someone at another table, (5) have the bar's band play Brahm's Deutsches Requiem all night and (6) when each person leaves, instead of saying 'Have a nice evening' the receptionist should say, 'One day you will die.' I think that would all go over well with Jakarta's in-crowd, high flyers and expat community. Don’t you?
Posted by Shravasti Dhammika at 7:00 PM

Great ideas, but don't count on it happening!

We have a lot of Buddha rupas being used in bars and casinos here in Las Vegas. I kind of like it a little, as there was a saying once, "any publicity is better than no publicity."

A friend of mine once made this comment on Buddha statues in bars and such places.'You never know, through their drunken haze, one or two people might see the Buddha's image and it might just awaken something positive in them'.

Then, painted in huge block letters on one whole wall, this from Padmasambhava:

"No matter what enjoyment and distraction you encounter during this lifetime, think: 'This is the seduction of Mara to prevent me from attaining unexcelled enlightenment! This Mara is more dreadful than a poisonous viper!' Keep that in mind! Although you may have perfect conditions in this life, they are just fleeting, futile and momentary. Keep that in mind!"

I might be a regular at that kind of joint.

I love your suggestions here!

There is actually a bar in HK located in the busy Tsim Sha Tsui that called "Kama", with a big Buddha embossment at the wall, watching people drink and drunk.

Buddha's statue is now seen as "cool" for some.... probably westeners.... For me, what is important is not the image, but the essense of the Buddha's teaching.

Even if I put Buddha's statue everywhere, bow at them 108 times every day, offer flowers and pork chop and shark fin, and whatever I like to eat three times a day...... so what??

A statue does not awaken the good inside me. It is the Buddha's charaters and teachings that inspire me!

i think there was this buddha bar operating in Singapore too..not sure if it suffered similiar response in alcohol friendly Singapore...

I'm in no position to comment on this as i only very recently made a mindful effort to stop consuming this beverage; i used to be an avid wine lover; even been to those wine tasting sessions...

Bhante...instead of Bharms Requiem...can we change to mozart's requiem...i like it better...lolz (it's amazing how this genuis can come up with such a huge plate of music styles...from twikle twikle little stars to Mass in C minor (dats one contribution of christainity i like; just like the ART and Architechture and even classical music for that matter...all came out from the catholic church....)

on a similiar note about reacting to subliminal messages..i would love to hear your views on when we attend workshops/seminars/social gatherings when the speaker start to incorp words like "Genesis", "God" and even more subtle stuff like "Adam and Eve" in their speeches...how should we react to it.....?

there's a franchise of buddha bar here in manila, too.

after the ambassadors of some asian countries (buddhist ones) complained, the management of the bar changed the name to "temple bar". but it's still the same bar, with the same buddha statue above the dance floor.

i still believe in respect, one should respect others and things that others respect..

just as it is inapproprate to use a Maddonna and Child statue in a toilet as a door stop, i think the same should apply to statues of other faiths..

the Buddha image is certainly not integral to the Buddhist practice, but out of respect to the general Buddhist community it is only right to treat Buddhist religious objects in the same way as say Christian or Muslim objects and books..

so the test of appropriateness to my mind is really very simple, ask yourself if you would be happy to have religious images of your own faith in any particular setting...

those without faith should respect those with faith and vice versa too..

i think Buddha images are fine for settings in which a sense of calm and peace is what is being tried to achieve..

but what purpose of a Buddha image in a bar with loud music?? esp if it is a venue where the trend is to get intoxicated...

well that's my view and i salute my Buddhist bros in Jakarta!

Bhante,
here I am again, asking for your permission to post this blog to my notes section in Facebook community.

Thanks for sharing your view.
I am a Buddhist living in Jakarta, but I haven't got involved in the protest against Buddha Bar in Jakarta.
I think both the pro and con sides have their own reasoning of whatever actions they are doing.
Although thinking that putting Buddha statues inside a bar is kinda humiliating, I prefer to control my mind not to get angry by this act. I try to find the reasons behind this kind of deed, whether the owner of the bar and the protesters; and one day when I have deeper knowledge and understanding of Buddha's teaching, I hope I can suggest ideas like you did. Well.. if I can, like in your post 'Humor', I would be able to do it like Buddha did, in a way that can bring smile or happiness in other persons, then discuss the problem again in a more condusive way.

Thanks again for your inspiration.

I am more concerned about an establishment that calls itself a "Buddhist Temple" that is really nothing more than a tourist trap.

So far from what I've read, the Buddhists in Jakarta have not threatened to blow up the bar or kill any potential patrons, the protest has apparently been in a peaceful and nonviolent manner, so what is the controversy?

I am more surprised that people are offended by Buddhists peacefully protesting a disrespectful use of religious images for the purpose of making a buck, protesting that Asian Buddhists do not understand "real" Buddhism, as if "real" Buddhists do not have emotions. Simply put, how can we ask others to respect our beliefs and treat articles of our faith with respect if it doesn't look like we respect them ourselves?

Yes, doo, some temples charge for admission and other fees, but sometimes these are necessary to provide a place of worship for the Sangha and pay the utilities, and it can show non-Buddhists the architectural and aesthetic beauty (hopefully) of Buddhism. Not all temples are just out to get your money.

Great post. I love reading about Buddha . Thanks for the article