Yesterday was the 9th anniversary of the passing away of Godwin Samararatne, my kalyana mitta and the person who taught me more about the Dhamma than anyone else. What follows is something that I had published some years ago on www.godwin-home-page.net/Friends /Enlightened-One/Enlightened-One.htm. The numbers in the text refer to references to passages from the Tipitaka and these can be found on the above web site. 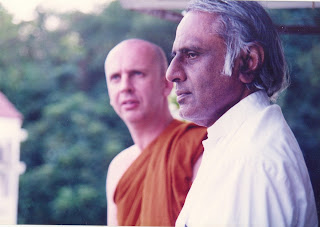 Outstanding. Thank you very much for sharing. I might as well translate it on my blog.

Bhante, you have certainly added warmth to our heart with your compassion and wisdom in sharing your thoughts on enlightment.

Buddhism is simply wonderful, and I hope that more people can get to learn about the immense compassion and wisdom of the Buddha, the Dharmma, and the Sangha.

Homage to the Triple Gem
MJ

What a gift. The friendship you shared with your teacher. And the words you have shared with us. Thank you.

Dear Shande,
Please feel free to use anything you like, just give the source. I'm glad you find it interesting to reproduce.

Dear Jamie G,
I read your 'Wisdom Page' with appreciation. In particular I liked your comment that while passion is good, a sense of balance prevents it from deteriorating into over-zealousness. Balance is one of those quiet oft neglected virtues. Do look at www.buddhismatoz.com under 'Balance.'

Just to let you know the link to Godwin's site didn't work.

Will read the article a little later.

I am writing a short piece on My Favourite Buddhist web sites for a Swedish Buddhist magazine, and I will mention you and Dhamma musings. I would also like a photo of you, a bit bigger (more resolution). Would that be ok with you and could you send me one to viryabodhi(at)gmail(dot)com

Wonderful, I cut and pasted and printed the posting to keep with me and read during the day.

Viryabodhi, Godwin site's correct URL is: http://www.godwin-home-page.net/Friends/Enlightened-One/Enlightened-One.htm
and it does work, only the URL in Bhante's message was wrapped due to it's lenght and has a spurious space in it.