More than 100,000 Britons have recently downloaded "certificates of de-baptism" from the Internet to renounce their Christian faith. This unusual initiative has been launched by the National Secular Society and follows on from a recent NSS campaign in which they put ads on London buses and elsewhere proclaiming "There's probably no God. Now stop worrying and enjoy your life 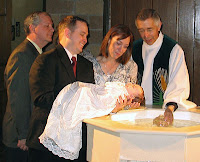 ." This campaign was in response to pro-Christian adverts on buses directing passers-by to a website warning those who did not accept Jesus would suffer for eternity in hell." The NSS president Terry Sanderson, said "We now produce a certificate on parchment and we have sold 1,500 copies at 3 Pounds (that’s US. 4.35 dollars, 3.20 Euros) a pop." Apparently this idea is spreading. The Italian Union of Rationalists and Agnostics (UAAR) won a legal battle over the right to file for de-baptism in 2002. The group's website carries a "de-baptism" form to facilitate matters. According to UAAR secretary Raffaele Carcano, more than 60,000 of these forms have been downloaded in the past four years and continue to be downloaded at a rate of about 2,000 per month. Another 1,000 were downloaded in one day when the group held its first national de-baptism day last October.
Now I have actually been baptized twice, once when I was a baby and again when I was about 12 or 13. I still remember this second dipping, although I have no idea why my parents, who weren't the least religious, decided to have my sister and I undergo the ceremony. Perhaps it was one of those 'just to be on the safe side and it'll do no harm' decisions that my mother sometimes took. I could well understand how this ceremony could have a powerful and salutary effect on a believer, but I don’t remember being anything but bored and a bit confused by the whole thing. Since then, of course, I have come to accept the Buddha's way of seeing things; 'Not by water is one made pure though many people may here wash' (Na udakena suci hoti bhav'ettha'nhayati jano, Ud.6). Even so, I have no intention of intention of officially de-baptizing myself. It would cost me 3.20 Euros; and besides, if when I die I find myself standing before 'You Know Who' it just might be a point in my favor to have two baptisms under my belt.
Posted by Shravasti Dhammika at 1:21 AM

Yes,
This is true in many Religions.
I am a Hindu (Sanathana Dharma).
I have undergone many Rituals , like Sacred thread wearing cermony,
and Having the marks of Vishnu (Chakra & Conch ) somewhat tattoeed either of my arms.
Some Rituals in Hinduism have Much Meaning.For eg., Wearing a Sacred thread means that you musst behave like a Brahman.
But Most of these are not explained Properly to us.
I find The definition of a Brahman as explained in the Hindu Upanishads,Bagvad gita and Buddha's Explation are all quite similar.
But its not at all Practised.

I'm more surprised people are actually paying for a piece of paper saying they have been "de-baptised"! Couldn't they just be creative and make up their own certificate? Does having a piece of paper make you religious or non-religious? 100,000 certificates at so much per certificate...Looks more like capitalism in action!

If the churches can embrace good old capitalism why shouldn’t the National Secular Society? But I do agree that a certificate seems a bit unnecessary. On the other hand I imagine that it is in some sense a reaction to a growing 'shout it from the roof tops' evangelism. 'They proclaim their faith so I proclaim my lack of it.' Have a look at
http://www.youtube.com/watch?v=WDCiqaqyJjk

I read somewhere that if you officially de-baptize, the parish have to strike you off the national catholic registry and not count towards the catholic population for census.

Just to be safe eh Ven? ;) Considering how you are a monk for 30+ years, I doubt the 2 baptism will count for anything. *chuckle*