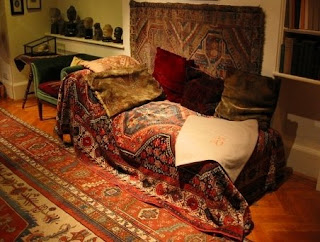 Just another comment on Buddha statues in inappropriate, un-spiritual or unexpected places. When I was in London I went to Freud's house in Mansfield Gardens to pay homage to the Master. There are small ancient Egyptian statues all over the house, collecting them was one of Freud's hobbies. What surprised me was the Buddha statues. There was a beautiful one, Japanese if I remember correctly, on his desk. More interestingly, at the end of his famous couch, positioned so that a patient laying there could gaze at them, was a line of Buddha images. I have tried to find a picture of the couch looking from the head towards the end so that these statues can be seen, but all the ones available have been taken from the opposite angle. But even from this angle you can see the heads of two Gandhara Buddha head. Of course, sometimes a Buddha statue is just a Buddha statue.
Posted by Shravasti Dhammika at 1:20 AM

of course a buddhist statue is just a statue; the first of such were made of mud/clay 500 years after the buddha passed away.(incidentally same time for the written dhamma?)
my personal view is a buddha statue can be bought as a form of house decor...for buddhist/non-buddhist alike...so long as we have the common sense to treat it with respect and not hang our underwear on it; in bars that sell alchohol; in casinos/gambling dens or treat the statue as some divine statue capable of performing some miracles...correct me if I'm wrong...i still tend to regard the buddha as a very wise and compassionate teacher....you can change the "very" to "most" but nothing more...nothing less...:)

Hi Venerable. Welcome back! :) I see you've been missing in action for a while browsing your blog a while ago.

I'm still puzzled with regards to that question Ven... Did Buddha believed in or talk about aliens or "beings on other planets / galaxies" before? As you might have read in my previous comment that i've read Ajahn Brahm's talk on Science and Buddhism which says Buddha did talk about such beings. But from your reply to my comment, you too stated you were sure Buddha didn't mention such beings! Here's the excerpt;(Ajahn Brahm's talk on Science and Buddhism):
"There is a lot of interesting stuff in the old suttas, even for those of you who like weird stuff. Some times people ask this question, "Do Buddhists believe in extra terrestrial beings, in aliens?" Would an alien landing here upset the very foundation of Buddhism? When I was reading through these old suttas I actually found a reference to aliens! It's only a very small sutta, which said that there are other world systems with other suns, other planets, and other beings on them. That's directly from the Anguttara Nikāya. (AN X, 29)"

I'm really curious and confused now... So did Buddha or did Buddha not? I'm a lay person who knows absolutely nothing about the tipitaka, reading from sources like yours and ajahn brahm's from time to time only. Hope to see your reply soon!

Ps: Sorry! But i've got one more...(question) :) Do therevada buddhists believe in transfering of merits? Or rather did Buddha teach that?

Bhante,
here is photo of the Buddha statue Freud acquired in 1934:
click here

Dear IS IT REAL
Anguttara Nikaya X, 29 mentions that Brahma's power extends throughout the far reaches of the universes but it does not mention life on other planets. See tomorrow's posting. Concerning the transference of merit, please go to www.buddhismatoz.com and look under 'Merit' and 'Transference of Merit'.
Dear Brakus, thanks for the picture.

Talking about life-and-death, there is a very famous saying in a Catholic burial ground in HK. It says:

Today my body returns to ashes, where it belongs

Tomorrow your body will be the same

(this is a lousy translation, the original text for Chinese reader:
今夕吾軀歸故土
他朝君體也相同)

The best of it is that this burial ground is facing Happy Valley, the horse-racing (and gambling) course.

Such a beautiful article. I am a big fan of Antique Buddha Statue . Thanks for sharing.

I looked through all of your posts and was blown away by the depth of your information. Thank you for coming up with such a unique piece.  You should also check out Buddha statues for sale