And, For Corrupting A Myna...

I like mynas. They are perky, bold and resourceful little birds. Nearly every day, sometimes in the morning but more usually around 3 pm, I hear the unmistakable sharp creaking keek keek keek keek kok kok kok kok of the pair of them out on my upstairs veranda demanding some table scraps, which I always give them. And they can be quite insistent if they don’t get something. We have three species of myna here in Singapore, mine being the Jungle Myna (Acridotheres fiscus). Don’t let the name fool you, they are as at home in the real jungle as they are in the concrete equivalent. They are trying to evict the drongo who lives in the large fig tree behind me but right now he's holding his own. But they have chased away the small humming birds that used to visit my jasmines. I'd have to admit, mynas are one of the bullies of the bird world. But look! I don’t want to get involved in any neighborhood squabbles. I just feed anyone who asks for it. 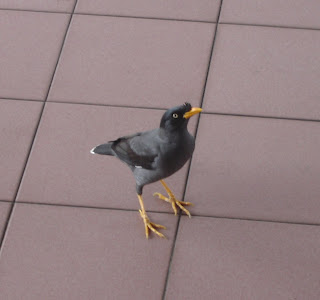 Posted by Shravasti Dhammika at 12:11 AM

Thanks for reminding me of a part of my daily life in Singapore that I had forgotten about. I always liked the energetic and cheeky way that the mynahs hopped about. Here in Stockholm the daily birds include jackdaws and magpies, more intimidating but also beautiful, especially the glossy black wings against snow.

I have been told that my first family pet was a mynah, which my father won in a work sales competition-how desireable a prize this was in 1963 Calgary, I do not know-and which my mother never liked, partly because I would crawl around and eat the bits of fruit which "Robert" discarded from his cage. My father and his mother both loved animals and I'm sure provided the bird with the choicest morsels, much to my mother's dismay. One day, Robert escaped from our apartment when my mother "accidently" left the window open while cleaning and there were no more pets in our house for quite awhile.
Or so the story goes...
Thanks for evoking some pleasant memories!

Actually, what you have there is Acridotheres javanicus, formerly known as the "white-vented myna" because of the white patch on its rumps, but now its vernacular name appears to have been changed to "javan myna".

It's an invasive exotic species that has become so successful in urbanised Singapore, and much detested by my ecology colleagues. We found a baby fledgling that dropped out of its nest on the hill of the university, and some of my less compassionate peers snorted and said we should just take the chance to get rid of a junior member of this pest species. Unfortunately, despite the best attempts by us to feed it with semi-liquid food via dropper, it died in the night.

Ironically, this species is even more prolific than the common myna, Acridotheres tristis, which is brown in colour but otherwise looks similar.

When they're at the window, they sing in a myna key?

bhante...i seriously think those 2 mynahs are 'karmically' affliated to you...maybe you guys were related in your previous lives...ever wonder y they come to your pounch when there's a hugh coffeeshop downstairs with more food? :)

Two years ago I found a nest built by some pink-neck green pigeons in my in my bedroom balcony. These birds are beautiful, quiet and not greedy. They are not of the same species as those seen on the ground around Singapore..Since then there have been six rounds of egg-laying (each time 2 eggs), hatching, feeding and finally flying off, each cycle about 2 months. The adult birds appear to be a different pair each time. I was able to observe them at close range from courtship, to sharing responsibility in building the nest (as I did not destroy the old nest, each successive pair spends time tidying it and reinforcing with new materials), in hatching and feeding the chicks. This experience convinced me that animals are really very intelligent creatures and very human-like in many ways. Perhaps they are even better than some human beings when it comes to parental responsibility. The birds incubate their eggs, feed and sit with the chicks on 2 shifts. The change of shift is amazingly punctual at around 8am and 5pm even when it is raining heavily. The one in the nest will not leave until the other arrives. Only during shift change do I hear them communicate briefly in gurgling, clucking sounds. From experience I know that I can walk right up to the nest after the chicks are hatched because the parent bird will not leave the young even in the face of danger. When I stand near and if the chick tries to peep out or to get out from beneath the parent, the parent will sit tighter on the chick and try its best to hide it by fanning out its feathers. It is not easy but sometimes I succeed in coaxing the parent bird to accept food like wolfberries and figs, especially if it is hungry having sat in the nest and feeding 2 hungry chicks for hours. It is a great blessing that I could witness all this up close to see a different aspect of samsaric existence. The experience makes me respect animals more and I resolve to remain a vegetarian and to work harder in my practice to break out of samsara. There were some occasions when a chick did not survive or one of the eggs did not hatch. I would bury these at the foot of the bougainvillea tree and wish the deceased or unborn to move on to a happier rebirth.

Thank you all for your comments, observations and reminiscences, even the myna ones. Who would have thought there were so many Buddhist bird-lovers out there? I will not comment on WIZWMAN's habit of watching pigeons mate but I suspect this comes very close to breaking the third Precept.

Bante, I did not see them mate only saw them frolicking among the tree tops. The final stage of courtship appears to be the male bringing female to the nest and continue courting by wagging its tail vigorously and gurgling to the female who is more interested in inspecting the nest. I swear that was all and therefore could not have broken the 3rd precept.
Bante, I seek your advice on this please: I am very lucky to have a very close tree top view of a dense canopy of trees. Mornings and evenings I watch many different species resting and flying around. They include regularly (those I can identify) sunbirds, black neck orioles (beautiful birds with a body of golden yellow feathers and a black strip that goes around the back of the neck like a pair of stylish sunglasses), exotic coloured parrots (saw a blue-crowned hanging parrot just yesterday), small electric blue coloured feather birds, cuckoos, crows , mynas and once an eagle circling in the air high above the trees, and many more I can’t identify. Do you think I may reincarnate into a bird if I die suddenly while watching them or with last thoughts worrying whether the pigeon will return safely to relief its partner; whether the chicks who flew the nest are safely united with their parents? How can I indulge in this pastime without the risk of waking up to a new life with wings? Thank You.

Dear Wizwman,
It is not interest that is a factor in rebirth and if it were car enthusiasts would be reborn as Toyotas, Fords or Chryslers. Dispositions and habituated traits developed in this life simply continue into the next life with all their attendant feelings, leanings and consequences. So the tendency to have a strong interest will probably re-emerge, although there is no reason that it will be an interest in birds.