Gaps In The Maps?

Until recently, I never knew that there was a Buddhist tradition of map making. Did you? Well there was. Ancient Buddhist maps always showed either Mount Meru or Bodh Gaya in their centre. The most famous of these is the Gotenjiku Zu, Map of the Five Indias, drawn by the Japanese monk Juaki in 1364 (Sorry, I can't find a picture of it). This map is based on Hiuan Tsiang's account of his pilgrimage to India and indeed even marks his route with a red line. Mount Meru and Lake Anotatta with the traditional four rivers flowing out of it is shown in the centre, while Bodh Gaya is located towards the south-east. The purpose of the Gotenjiku Zu was didactic and scholarly rather than practical. This is clear from Juaki's own words. He said: "With prayers in my heart that Buddhism might prosper, I engaged myself in the task of making this copy, wiping my eyes which are dim with age, and feeling that I myself were actually traveling through India." A Japanese map from called Map of Jambudvipa from 1744 shows India in the centre of the world, China to its right, and a little further along, Japan. 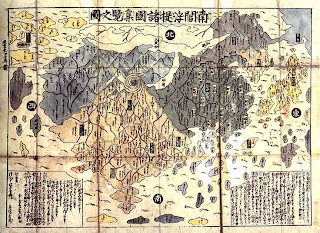 A Burmese map of the world, also from 1833 shows the world as it is described in Pali commentarial literature. 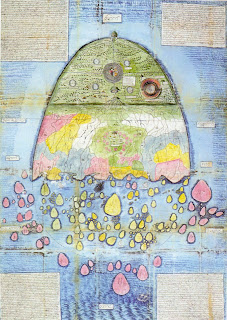 However, route maps meant to be used by those going to India on pilgrimage did exist too. These were probably not available for ordinary pilgrims but were made by and for royal embassies. One of the few such maps that survives, from northern Thailand, was drawn in the 19th century although based on a much earlier prototype, probably by someone who had actually been to India. The map shows important pilgrimage sites like Rajagaha, Kusinara, Campa and Dona's stupa, and gives their direction and the number of days needed to reach them from the Mahabodhi Temple, which is depicted in the centre of the map. 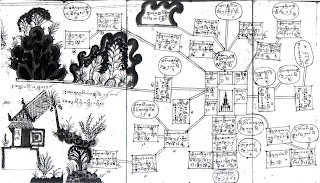 While all these maps are extremely interesting in themselves, they also say something about traditional Buddhist cultures. Maps based on Ptolemy's Geographia (1st cent CE) fairly accurately depict the Roman world. Ancient Arab maps were full of fantasies but were sometimes accurate enough that some geological features can be recognized. The Mediterranean and the Arabian Peninsular are clearly recognizable in El Idris' world map of 1154. By the 16th century, European maps were starting to become increasingly accurate and realistic. Asian Buddhists maps by contrast, remained almost completely divorced from geographical reality right up to the late 19th century, when they were abruptly and entirely superseded by modern maps. Not one of these maps contributed anything to geographical knowledge. Buddhist monks were great travelers from the earliest times, but this never translated into a realistic understanding of the world. In this, and I suspect in other areas of knowledge, theory always trumped observable fact, and facts confirmed by Western knowledge were kept at bay. I wonder if the same thing could be said of Abhidhamma 'maps' of consciousness?
Posted by Shravasti Dhammika at 1:24 AM

I am trying to find the story of 'the river' from the Tipitaka so as to get the correct details of the story but have not been successful from the web. Would you be able to advice? I read the story from another source which did not state the sutta it may have originated from.

Comparing "Asian Buddhist maps" with western map mapping seem to be comparing apples and oranges. Is it a Buddhist trait or an Asian trait? Indian, Sri Lankan, Burma, Thai or Cambodian?

Does the Chinese count in? I wonder how other Chinese maps would stack up here. It would be interesting to give it a more balanced view.

Further, in terms of practical usefulness, it depends on the unit of measure. If one were to quantify practical usefulness by how one could use one's knowledge to conquer and colonise foreign lands for material gains, then map making would count as useful, while meditation could be deemed unuseful.

In addition, would the tendency towards oral transmissions of teachings have included travel directions? If so, this may have meant that visual aids such as maps never quite catch on.

Dear Xiong,
The story is from the Mahavagga, the first part of the Vinaya. Not difficult to find.

Ah the story of the Tang priest and his Journey to the West! In recent years, a Buddhist organization out of Taiwan, Tzu Chi, published a photographic chronicle of the journey along with a map, based on his own records. In fact, his records have led archaeologists to discover lost Buddhist sites in Afghanistan (and one hopes they won't be lost again to ignorance in action by the Taliban).

More recently, I took that very journey myself -- if only metaphorically, since 26 storytellers in New York City recently told the entire Journey To The West in an 18 hour marathon. I was thrilled to be one of those tellers. And the telling was kind of a ritual reenactment for all of us, an 18 hour narrative meditation. And of course, there are no maps for that.

Looking to renaissance Europe, and Dante's trilogy, many have created maps based on his cosmology, which includes a mountain that represents Purgatory. Sort of the inverse of the descent to the Inferno (an odd name considering that the lowest rung was in fact a frozen lake).

And speaking of spiritual pilgrimages, this Jewish Buddhist wishes you a very happy Passover.