Tuesday was the 50th anniversary of the Tibetan uprising against the Chinese Communists, one of the many tragic dramas in the blood-soaked 20th century. Perusing the internet on the Tibet/China issue I notice virtually only two positions – the pro-China one (almost entirely Chinese with a few Western ‘realists’ and cynics sticking their bib in) and the pro-Tibet one which seems much more board-bases. I notice now that the Chinese web sites highlight all that was negative about the old Tibet – serfdom, slavery, primitive justice and an almost complete lack of modern development, all of which is true. They make a great deal of CIA skullduggery in Tibet in the 1960’s and 70’s knowing that booing the wicked old CIA will always find you a few friends. But didn’t China support, train and finance communist insurgents in Burma, Thailand, Laos, Cambodia, Malaya and Indonesia for decades? Why is it unacceptable for the ‘Running Dogs’ to do thi

s and but not for the Absolutely Correct Communist Party of the People’s Republic of China?(that’s how it described itself in the 1970’s). Then they go on to claim that Tibet has developed under their rule, which is ironic because this is exactly the same argument the colonialists and the imperialists used to use to justify their domination of other countries. Nonetheless this is generally true too.
When I was in Tibet in 1984 I noticed the massive reforestation that had gone on around the Lhasa valley, a valley which had been completely denuded in the old days. The realists and cynics love to scoff at Western supporters of Tibetan independence, claiming that they suffer from the Shrangla La syndrome, a hopelessly unrealistic view of the old Tibet. They are quite correct for the most part. But of course the cynics and the Chinese sympathizers are equally unrealistic about Chinese rule in that they downplay its appallingly brutality and the fact that it is almost universally resented by the Tibetans. The two things I saw in Tibet that most sticks in my mind are these. Directly in front of the entrance of the ancient Ramoche Temple in Lhasa was a stinking urinal (and I mean ‘stinking’) and when I went in to use it (I was desperate) I noticed that the floor was entirely paved with Mani stones. Now Mani stones don’t mean much to me but I know that they are considered sacred by the Tibetans. This was probably only one of numerous ‘in your face’ ‘f*#+k you’ insults that the Chinese inflicted on the Tibetans religious sensibilities. When I visited the then still neglected and partly ruined Drepung Monastery, a young monk took me by the hand and gesturing to me to be quiet, led me into a building, along a passage and up some stairs. We emerged on a third floor balcony overlooking a courtyard. Stacked in the courtyard were thousands of butter lamps, cymbals, bells and pieces of gilded metal that had once been parts of large images. Beside a pair of industrial scales were perhaps 50 large sacks full of small Buddha images. I am sure that the Tibetan did and still do deeply resent all this desecration and destruction. And the old excuse that it was all done by a few ‘bad elements’ is a lie. It was a deliberate policy of the Chinese Communist Party, the same party that still rules the country.
Then there is the Tibetan exiles and their supporters who have a pronounced tendency to romanticize the old Tibet to an almost comical degree. Take the Khampas, a bunch of murdering highwaymen who terrorized of the northern grasslands. And when they weren’t doing that they were preying off pilgrims at Mt. Kailash – in between chanting Om Mani Padme Hum. A recent book about them is called Gentlemen Bandits. I don’t think so! Another book I saw recently is entitled The Tibetan Art of Parenting. What! Read travelers accounts of the level of hygiene in Tibet and the superstitions and taboos that surrounded childbirth, and shudder. And traditional Tibetan medicine? All the diplomatic missions to pre-1951 Tibet mention being swamped by people pleading for medicine and medical treatment. Smallpox and syphilis, easily cured or prevented in the West, were all… you get the general idea. And as for the catastrophe of the Chinese invasion, 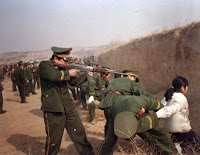 much of the blame for this can be laid at the door of the Galupa monastic hierarchy. For 34 years after 1912 Tibet had the opportunity to join the world community, to make friends, to build alliances, to join the League of Nations, the International Postal Union, etc. and they failed to do so. In fact, they adamantly refused to do so. Every innovation was blocked or undermined by senior monks, who saw them as a threat to their power. For all their abilities to defeat phantom Hinayanists and Sautantikas in mock debates, they knew nothing of the real world and their obstructive ignorance cost them and their people dearly.
So where does that leave us. To me it’s very simple. Whether old Tibet was a feudal hell or a spiritual paradise, whether the Chinese are vicious oppressors or much-needed reformers, the Tibetan people want to be and deserve to be masters of their own destiny. Put it to the vote and let them decide. Of course, the Communist party will never allow this because they know what the outcome would be. They will not let even the Chinese people decide who rules them for exactly the same reason. The Dalai Lama and his followers defiantly have right on their side but unfortunately right doesn’t mean much in the world of realpolitics.
Posted by Shravasti Dhammika at 1:08 AM

With respect, just a small comment about Tibetan medicine. There is considerable interest on the subject of Tibetan medicine amongst the scientific community in the West, which has led to many conferences and studies. It is deemed to be quite a sophisticated and remarkably precise practice. But like many ancient medical arts such as Aryuveda or homeopathy, is better at treating chronic illnesses. There is a good documentary on google video about Tibetan medicine produced in Canada by the highly respected Dr. David Suzuki.

Thank you for the blog.

It seems the big brutal dog has barked and conscious idealism has been overpowered.

Samsara is the basis of all our lives and as Tibetan Buddhists we tend to hold the view of idealism close to us, however we should also remember socially, that realism is an important aspect of the path.

I have just recently started a petition where I live, in Western NY, for this very cause. My Peace group has put out statements, none of which have made it to the papers, about the atrocities of the Chinese on "their own" people. Some of these, of course, not being their own people.

Tibet, for the most part, has had no place in the imagination of anyone here. I've spent time educating them about Chinese policy and not about Buddhism or Tibet's history.

Even a concervative report like the US Human Rights report, sites extrajudicial killings and horrible abuses with virtually NO freedome of information. The Xinjian Uighur Autonomous Region suffers a very similar fate as Tibet, but sadly being Muslim, little sympathy goes their way.

The movement that we're hoping to start is not to punish the Chinese people, but to understand the impact of our purchasing. Maybe this will be coupled with a buy less, buy better, buy local campaign. Do we really need another cheap, mostly useless, possibly poisonous gadget?

In any case, that is what I'm trying to do. With enough signatures, we'll try and get local government to stop their buying from China, and make it known why this is going on!

Thank you for the information!

Forgive my reaction, but holy crap! That picture with the Chinese soldier about to put one in the girl's head... I, I, just am having such a hard time understanding how someone could be so ruthless. Such utter brutality. Just what the hell did that girl do to deserve something like that? And the other two soldiers, that they are ducking hard to get the hell out of the way! I work in law enforcement and see dead bodies regularly (accidents, natural deaths), and I can't help but feel something pull my heart low, as if I could weep uncontrollably. I'm sorry, these kinds of photos stir up some very strong emotions in me.

Dear Angie, what you say is true but so is what I said. A real quandary! And Sheridan, I hope your campaign is a success. May the Tibetan people one day gain their freedom. And Jamie, no one deserved to be shot in the head publicly, no matter what they have done. And the policeman? He probably goes home from work, kisses his wife and reads his kids a bedtime story. Another quandary!

Dear All; I'm by no means siding the Chinese libration army but i think we forgotten the otherside of the arguement...I think china can afford to let Tibet Go...there aint any gold or oil there....BUT
As we might be aware of..China has a huge territory...and has several unresolved issues like the far West piece of motherland XinJiang wanting independence and of course not forgetting Taiwan too....I'm not too sure if they allow tibet to be independent (which i think tibetans know they dun wan..they just wan autonomy; not independence) what will happen to Xinjiang and Taiwan?

I've written before in my blog this issue; i dun side either camp cos as bystander, it's very easy to be an arm-chair critic.

here's what i wrote in my earlier blog entry
http://artofrebirth.blogspot.com/2008/04/its-cruel-world-out-thathistory-is.html