How we see things sometimes completely differently from how earlier generations saw them, is something that fascinates me. And nowhere is this difference in perception more obvious than in matters of religion. When I was in London, walking around looking at the sights, I noticed a statue on the other side of a very busy road. With the greatest of difficulties I managed to cross over and found myself standing in front of a graceful naked youth. 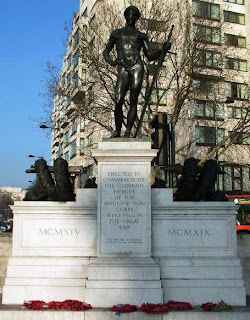 He was holding a sword so I assumed he must be commemorating some battle or some war, but so taken was I by his beauty that I didn’t bother to look at the inscription on the pedestal. When I did my feelings of admiration quickly faded. The monument commemorated Britain's First World War Machine Gun Corps. Now I don’t know much about that ghastly conflict, but I know enough to be able to imagine what sort of damage machine guns can do to the human body. I felt quite depressed. Then I noticed a much smaller inscription below the main one. It read, 'Saul hath killed his thousands but David hath killed his tens of thousands'. Now this looked to me like something out of the Bible. Later research confirmed that it is, it's a verse from I Samual 18,7. Thinking about this now, I'd have to admit that it is probably a rather appropriate quotation for a machine gun corps. But with how religious perceptions have changed since 1925 (when the statue was erected), would such words exalting carnage on a massive scale adorn a memorial, even a war memorial, today? Almost certainly not. In some ways we have changed. And mainly for the better.
Posted by Shravasti Dhammika at 1:07 AM

That things change means there is impermanence.