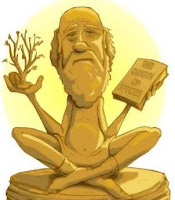 Feb 17, 2009 — It seems odd to call a secular scientific theory like Darwinism a Buddhist belief. That’s what National Geographic claimed today. “Darwin the Buddhist? Empathy Writings Reveal Parallels,” wrote Christine Dell’Amore about new ideas about Darwin by Professor Paul Ekman, the eminent psychologist. What could Darwin possibly have to do with Buddhism? Ekman told an audience at the annual meeting of the American Association for the Advancement of Science in Chicago that Charles Darwin was fascinated with facial expressions of emotion. Indeed, he wrote a book on it: The Expression of Emotions in Man and Animals (1872), in which he hired photographers to film faces of people expressing happiness, rage, sadness and other feelings. Darwin suggested that empathy was a universal trait that had evolved in humans.
Ekman said the idea of universal empathy meshes with Buddhist beliefs about compassion. Ekman also suggested “it’s also possible that Darwin encountered Buddhist teachings through letters from other scholars of the time.” To strengthen the Darwin-Buddha connection, Ekman shared an inside story: the Dalai Lama had told him that he “would consider himself a Darwinian.”
Ekman did not explain how this new compassionate Darwin relates to the old picture of evolution as a process of pitiless indifference by a natural world red in tooth and claw. Nor did he explain why compassion, if genetically inherited in some people and not others, needs to be cultivated – a role seemingly more suitable for religion. The article simply stated point blank, “Until psychologists figure out why the disparity exists, he said, ‘the survival of our planet’ depends on cultivating compassion.” This begs the question whether even survival is a good thing in a universe of pitiless indifference. Nevertheless, the article suggested people could go to “compassion gyms” to improve their empathy fitness.
Somehow, this makes sense to Ekman as he imagines primates becoming more self-aware. The NG article ended with a quote to this effect by Barbara King, an evolutionary anthropologist at the College of William and Mary in Virginia. She said, “We wouldn’t be human in the ways we are human today if apes were not deeply emotional creatures and deeply social ones. We are ... products of our past.”

I found this interesting article on one of the more loopy 'creationist' websites (creationsafaris.com). It seems to have enraged the web master that some aspect of the Dhamma should be taken seriously and was accompanied by a rebuttal full of ridicule and scorn. I don’t know what the Dalai Lama meant when he told Prof. Ekman that he was a Darwinian but I certainly am, in the sense that evolution is an irrefutable scientific fact and it is not, as far as I can see, at odds with anything the Buddha taught.
Posted by Shravasti Dhammika at 1:25 AM

Quote: "Dear IS IT REAL,
Please go to www.buddhismatoz.com and look up 'Kamma', 'Determinism' and 'Free Will'. I'm sure this will answer your questions."

Then wouldn't that indicate that the miserable and poor, and feels miserabe woman has bad karma, and the friend who made that comment has good karma, not because of her financial wealth status but because she's generally always happy. -(a shallow but truthful fact is that money can buy you *some / *much happiness in our mortal world.)

Both are at extreme ends.
One is conventionally beautiful, wealthy, have healthy relationships and is happy most times...

Another is conventionally not pretty, has poor financial status, has unhealthy relationships, misfortunate events that seem to constantly happen, and is sad and miserable most times...

So from what i've read, is that suppose to indicate that the latter has bad karma?