The Tipitaka is full of little-known but beautiful, insightful, memorable or dramatic passages. One of the most poignant of these is the first of the seven questions that Sakka asked the Buddha. It would have to be on a par with Pontius Pilate's famous question 'What is truth?' This question perfectly sums up humanity's deepest yearning but also most intractable problem. The question is: 'Why is it that…wanting to live in peace and without hate, harming, hostility or conflict, humans have no peace and live with hate, harming, hostility and conflict?' For the Buddha's answer to this question go to the Digha Nikaya and read the Sakkapanha Sutta.
Sakka's questions and the Buddha's answers must have been very popular in ancient times because the whole scene of the Sakkapanha Sutta - the Buddha in the Indasala Cave being approached by Sakka and Pancasikha - was often depicted in ancient Buddhist art. The earliest depiction of it is from the railing at Bodh Gaya dating from about the 2nd century BCE. Below is a picture of a cast of the sculpture. The original is in the museum at Bodh Gaya. 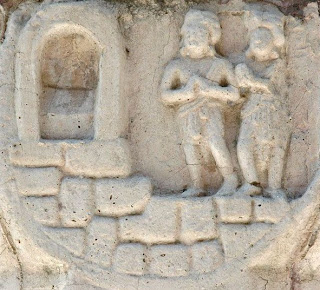 The picture below is of me at the Indasala Cave. I spent five days there meditating in 1982. I don't recommend it. The cave is very damp and smelly. 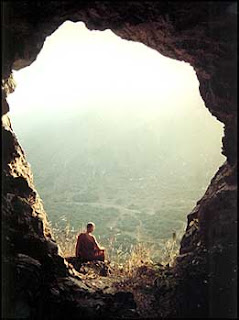 Posted by Shravasti Dhammika at 4:08 AM

Beautiful photo, even for a smelly cave.

bhante..you should start a photo gallery of your younger days... :)

I wish to thank you for making me aware of Sakkapanha Sutta.