Commandments And Precepts I

Everyone knows of the Ten Commandments although very few know what they are. A survey or regular church-goers recently in the US found that only 1 person out of 10 knew them all. A survey amongst 5000 Americans who identified themselves as Christian found that only 129 knew them all and 2642 couldn’t name any of them. Perhaps there is some excuse for this lack of religious knowledge because the most well-informed answer to the question 'What are the Ten Commandments?' would be 'Which Ten Commandments?' You see, there are actually three versions of the TC in the Bible. Two of them, at Exodus 20;2-7 and Deuteronomy 5;6-17 are nearly the same but the other one at Exodus 34;11-27, the only one the Bible actually be calls 'the Ten Commandments' (Hebrew aseret ha'dibrot), is very different from the other two. The TC that the few people who do know them do know, is the Exodus 20;2-7 one. The interesting thing about this supposed ethical blueprint is that the first five commandments do not really pertain to what most people would consider to be ethical behavior. Not working on the Sabbath may be overexertion (it certainly is a bore) but its hardly immoral. The 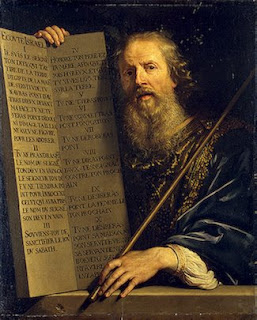 n there is the small matter of the first three commandments which, I would contend, have done very little over the centuries to foster inter-religious harmony and understanding. The statement 'for I your God am a jealous God punishing children for the iniquity of parents to the third and fourth generation those who reject me' does not fit at all well with my concept of ethics either. Then when we get to the last four commandments, the ones that actually deal with morality, I also have a few problems. Apparently, number six does not say 'don’t kill' (harog), it says 'don’t murder' (retzach) which implies that killing in other circumstances might be acceptable. Number eight is interesting too. Many scholars contend that it does not really say 'Thou shall not steal' but rather 'Thou shall not kidnap', kidnapping for ransom or to get hostages being as common in the Middle East then as it is today. Number nine covers one type of lying - lying in a court about someone else, but not all the other types of dishonesty. The last commandment, about not coveting, is a good one, it suggests that one should not just control one's behavior but also do something about the emotions and desires that motivate behavior.
It seems to me that even these ethical principles, good enough as far as they go, are spoiled by the fact that God demands the death penalty for infringing them (Exodus 22;20, Leviticus 24;16, Ex. 31;15, Ex. 21;15, Ex. 21;17, Lev. 20;10). Death for adultery! Isn't that what we condemn the Iranians for doing? Death for not believing in God! Isn't that what we have criticized Afghan lawmakers for proposing? And if you don’t believe in and honor God he will, he says, 'corrupt your seed and smear filth in your face' (Malachi 21;4. I could manage the filth thing but having my seed corrupted is a bit much if you ask me. My seed is very important to me.
The TC have been and remain today the basis of Jewish and Christian ethical teachings. While some uphold their relevance in today's world, others claim that the average decent 'man in the street' could come up with a far better guide to moral living. Tomorrow I will look at some of these 'alternative' Ten Commandments.
Posted by Shravasti Dhammika at 1:49 AM

Nice pages!
we like your blogging style and we want to advertise your blog.
If you want us to link your blog in our site,
write in a mail :

1. your site/blog address;
2. a representative image of your blog;
3. a detailed description of your site.

we would be honored to advertise your blog on our blog!
anyway my friend, keep on with your great work!

I've always found it hard to recall the Ten Commandments precisely because they were a little strange to me. Having lived in Bible States in the the US I was once both amused and despairing when there were people who were fighting to have the commandments displayed in public spaces including classrooms and kindergarten classrooms. It just seemed to me that the lines would just go over most five-year-olds' heads (and indeed, are easily forgotten by adults as well). I'm also a bigger fan when ethics/morality come from a basis of love and compassion than when it is born out of fear and the threat of being punished. I look forward to your blogging of the alternatives.

And apparently the 'thou shall not murder' is bypassed when the bronze age sky deity commands it. Specifically, even the deaths of millions of innocent children. If I had the time, I'd locate the scripture where Yahweh commands 'his people' to cut the fetus from a woman's womb. I guess Yahweh takes land rights that seriously.

You ought to see the looks on Christians faces when I tell them I could never be a Christian for that reason. They tell me I am taking the scriptures out of context, especially since that's 'Old Testament'. If I remember my Bible, Yahweh is the 'god who doesn't change.' So what's different?

This can be quite devastating to sensitive souls, but I suppose the Israelites were a tough lot.