As I'm sure you know, its World Voice Day (Goodness! Who thinks up these things?). This being so, I thought it appropriate to say something about the Buddha's voice. The sound of the voice is intimately connected with one's physical and psychological state. Anxiety or excitement can produce a high-pitched, jabbing or rapidly fluctuating voice. Anger, fear or depression can produce a strangled shrieking sound or alternatively a low threatening one. The Buddha is described as having a particularly beautiful voice, which reflected his deep inner stillness and warm compassion and this must have made his talks even more appealing. It is said to have had eight characteristics; it was distinct (vissattha) and clear (vinneyya), sweet (manju) and pleasant (savanaya), well-rounded (bindu) and flowing (avisari), deep (gambhira) and sonorous (niddadi). One observer noticed that after the Buddha’s talks were over the audience would get up and leave reluctantly, keeping their eyes on him (M.II,140). 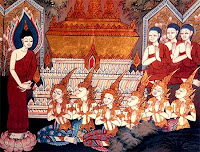 In the Mahavastu, that fascinating and chaotic jumble of Buddhist legends and stories, there are two rather beautiful poems praising the beauty of the Buddha's voice. Here is one of them from vol. II, p. 170.

Beautiful gleanings from a deeply literate individual. ^_^ Thanks for sharing.