The general consensus amongst scholars is that the books of Exodus and Deuteronomy were composed, bit by bit, from different sources, between about the 6th and the 3rd centuries BCE, so they roughly correspond with age of the compilation of the Tipitaka. It is interesting therefore to compare the Ten Commandments (any one or all three versions) with the Buddha's five Precepts. Their similarities and differences, what they include or leave out, are indicative of the two (or three, if we include Judaism) religions.
A precept (sikkhapada) is a self-imposed rule or discipline. The moral rules that all Buddhists commit them 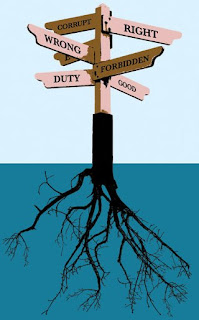 selves to and try to live by are called the five Precepts (panca sila). They are (1)
not to harm living beings, (2) not to steal, (3) not to engage in wrong sexual behaviour, (4) not to lie and (5) not to take alcohol or other intoxicating drugs. In following these Precepts one gradually develops a respect for the life of others, for their property, their dignity, their right to know the truth and a respect for the clarity of one's own mind. The Buddha called adhering to these Precepts a consideration to others which 'creates love and respect and which is conducive to helpfulness, non-dispute, harmony and unity' (A.III,287; M.I.322). I think this passage needs to be more well-known so I give it in Pali as well…'piyakarana, garukarana, sangahaya, avivadaya, samaggiya,ekibhavaya, samvattanti'. The Buddha saw adherence to the Precepts as a gift (danani) which would benefit both the giver and the receiver. 'When a noble disciple practices the five Precepts he gives the gift of freedom from fear, from hatred and from ill-will to limitless beings. And in giving this gift he thereby partakes in a freedom from fear, from hatred and from ill-will which is limitless' (condensed, A.IV,246). On another occasion, the Buddha called virtue 'freedom-giving' and 'conducive to concentration' (A.III,132) and he mentioned that one of the most important benefits of practicing the Precepts is that one experiences 'the happiness of being blameless' (anavajja sukha, D.I,70). In other words, Buddhists practices the five Precepts because they care about their own welfare and the welfare and happiness of others too.
Posted by Shravasti Dhammika at 1:18 AM

Wow, we have arrived into Percepts now! It is such a fortunate thing for me.

Since I first learnt the Five Percepts, I always think others are ok but Right Speech is impossible, unless I don't speak...

But, after Thu class, and probably from influence of a lot of other good friends and good things, I have decided to follow Right Speech, strictly. And, after this decision, I suddenly released that if I can really follow Right Speech, that means I won't lost my temper. A mordern city-dweller like me won't do any "wrong" actions like beating or killing somebody when I lose my temper. I always "express" my anger through all kinds of harsh, mean, pretentious speech!

'The happiness of being blameless' sounds so delicious! I am going to work hard to experience this.

And I would like to thank you for your blog and all these nice teachings!

It is wonderful that the precepts are thus explained. I find the explanation comprehensible, though I would like to know if anybody, if at all, finds it incomprehensible.

Somehow I prefer to be persuaded, rather than be "commanded". The first makes me more responsible and I become the owner rather than just a "obeyer", though I realise too that there are many things which might be beyond my comprehension.

I shall "copy and paste" your explaination if anyone ask me again about the five precpets.