Yesterday I listened to a lecture Professor Charles Collins gave at the Veritas Forum at the University of California in 2007, where he explained why he believes he can be a scientist and a devote Christian at the same time. Collins is an eminent geneticist and was head of the Human Genome Project. He is definitely no fool. I found his lecture absorbing, and thoughtful - up to a point. I was expecting him to say that his explorations in genetics have led him to believe in 'a' god - you know, one that’s not aligned to any particular faith, one that made the world and that then stands back and lets it get on with itself, without taking sides or answering prayers. But no! Collins believes all the evidence points to a specifically Christian god. His lecture kept me focused until the Q and A section when a student asked him; 'Why the Christian god and not the gods of Islam, or Hinduism or Judaism?' Then Collins dropped his 'evidence' and 'probability' stance and basically answered that because it’s the one he believes in. So as usual, we were back to the old 'leap of faith', with the emphasis on 'leap', although 'long jump' or 'jump in the dark' would probably be more appropriate. The previous regard for his close reasoning evaporated. I'm prepared to admit that a god 'in general' is within the bounds of possibility, although highly unlikely. But a god who has the specific and clearly defined characteristics of say Jehovah, Sat Nam or Vishnu, that to me is off the radar - right off it. Not because it offends logic or reason but because I see absolutely no evidence for it. And Collins was unable to provide any. Collins seems to have thrown overboard many of God's attributes mentioned in the Bible - creation in six days, flooding the world, siding with the Israelites in their wars with other tribes, etc. and perhaps it could be argued that such events should be taken allegorically. I would have liked to ask him if he believed that the outcome of not believing in this god results in eternal punishment. Whether one sees hell as 'separation from the divine' or as the eternal Belsen, Christian doctrine is very clear that God is intimately involved in hell - creating it for a specific purpose, assigning beings to it and requiring that that will be their eternal state. I would liked to have asked Collins this, not to put him on the spot, but to see how an intelligent, scientifically-trained mind approached, what to me at least, is a very serious ethical problem.
Anyway, listening to Collins lecture, and I listened to it twice, made me think yet again about the Buddhist position on the concept of an omniscient, omnipotent, omnipresent and omnibenevolent deity.
Christian acquaintances often ask me why I (and other Buddhists) so frequently return to the subject of God. In fact, I don’t often mention the subject, but it is true that it has some part in my speaking a 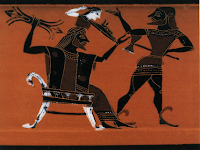 nd writing. Four headings in my new book A Guide to Buddhism A to Z relate to the concept of a supreme deity - Affirmation and Prayer, Agnosticism, God and Gods, and Theism. I always answer this question by saying; 'Because you are continually bringing up the subject, continually insisting that the spiritual life depends on belief in God, and sometimes even claiming that the Buddha taught that there was such a god. If this were not the case, the subject could be dealt with briefly and then the discourse could move on to more practical and reality-based issues. In all my years of teaching I have never discussed the matter of whether Athena really did emerge from the head of Zeus fully formed and wearing armor. Why? Because no one has ever asked me whether or not this story is true; no one has ever asked me what the Buddhist position on this matter would be; no one has ever told me that believing this story has some fundamental importance to questions of life, ethics and human destiny.'
In his lecture, Collins made it clear that he views agnosticism is a cop-out, a position taken by lazy minds. He then added that he could have respect for someone who becomes an agnostic after a long and sincere study of religion. This made me think of an interesting but rarely discussed problem with theism, at least the theism of the three main monotheistic faiths. People disbelieve (and believe for that matter) in God for a wide range of reasons: - to be different, to rebel, out of willfulness, because they want to upset a parent, because they resent any restrictions on their behavior, etc. But it is also true that many people don’t believe in God despite themselves. They have wanted to believe, they have tried to believe, but they find they just can't; the whole thing remains unconvincing to them. I have met people whose disbelief profoundly upsets them and who would give anything to be able to believe. What has the theist to say to people like this? What comfort can they give them? Are they to be deprived of any spiritual life because of their predicament? And what can the believer say about such people's destiny after death? What would Collins have to say to them? I know what I would (and have) said to them. 'The Buddha's spirituality does not centre on the existence or non-existence of a supreme being. Life can be meaningful, ethics can be sound, and peace of mind can be achieved, whether or not you believe in a god.' Incidentally, I say exactly the same thing for the people I meet who are very attracted to Buddhism but who tell me that they need to believe in God.
Posted by Shravasti Dhammika at 5:44 PM

"But it is also true that many people don’t believe in God despite themselves. They have wanted to believe, they have tried to believe, but they find they just can't; the whole thing remains unconvincing to them. I have met people whose disbelief profoundly upsets them and who would give anything to be able to believe."

Venerable, What you have said was exactly what I have experienced in my younger days. It was such a terrible struggle emotionally, for having a disbelieving heart and hence not "saved". Then I decided to make Bertrand Russell my "hero" and tried to be a "rationalist". But it was cut and dry and I realised my very limited "rational ability" makes a mockery of such an approach to life's issues. Thus, I was soon in a "rational" spritual crisis, so to speak.

It was indeed the great compassion of the Buddha for having taught His Dhamma, as His teaching has cut my spritual "gordian knot". I realised that many need not necessarily find the problems I faced in religion. They are quite happy being Christians, Hindus, Muslims, etc. Many people's need to believe in God/gods has also turned Buddha or Guanyin into god-like beings. Without their faiths in the divine, many are quite lost as to what is good and needed for self-restraint. From the Buddhist perspective, perhaps that's creating good karma too, I suppose, irrespective of the religion, as long as it brings about wholesome lives.

Dear No,
Here is, I feel, one of the many advantages of a god-free spirituality like Buddhism over the different forms of monotheism. If you can't accept, can't relate to or can't understand the god-idea, monotheism closes the door to you - it's all or nothing. The Dhamma can be relevant to believers, non-believers, not surers or haven’t decided yeters. It is happy to give you its insights and peace until you decide for yourself.

"The Dhamma can be relevant to believers, non-believers, not surers or haven’t decided yeters." - Hi Venerable, just so you know, I like this quote from you... It's so... Catchy! haha :)

S.M.,
It's post likes these that remind me why I like reading your blog so much. You are a voice of reason that I appreciate greatly.

Venerable, I definitely grok this post. I too am/was one of those who wanted to believe, but simply could not be convinced.

I'm not sure if Buddhas or Bodhisattvas hear prayers addressed to a monotheistic God to find religion, but I am very fortunate that I was able to learn about Buddhism in this life.

What I find ironic though is that the more I understand Buddhism, the more tolerant I feel towards the monotheistic faiths that created such inner turmoil for me.

I think Ajahn Bram told the story of a Buddhist who donated a kidney to a Christian who went around converting Buddhists. When asked why he/she gave the kidney, the Buddhist replied, "because they need it." What an example of compassion and humility.