A Stick In The Spokes

The wheel is one of the oldest and probably the most widely and continuously used, as well as the most recognizable, of all Buddhist symbols. In the Vedas the wheel (Pali cakka, Sanskrit cakra) is associated with conquest and royal power, and this association probably dates from the time wheels first started being used in India and war chariots evoked awe and fear. The Buddha's first sermon is called the Dhammacakkapavatana Sutta, the Discourse Setting Up (or Set Motion) the Wheel Of Dhamma. Here too, the wheel is used in the sense of power and dominion, but of the spiritual type. One 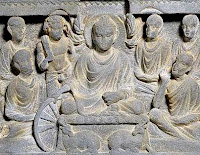 of the accoutrements of the Universal Statesman (cakkavatti) is a wheel. This wheel represents his just and benign rule (D.II,89) and when he becomes unjust, complacent or cruel the wheel 'slips from its place' (D.III,59). In an interesting sutta in the Anguttara Nikaya the Buddha associates the wheel with both royal power and sincere Dhamma practice (A.I,111), i.e. worldly and spiritual power. In the Tipitaka, the wheel is always said to have a 'thousand spoke' (shassara, e.g. D.II,172) ), a thousand mea 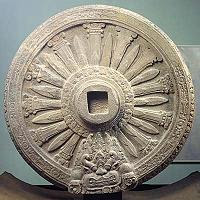 ning 'many'. The wheels on King Asoka's famous lion capital and most early examples of the Dhamma wheel are depicted like this. (First picture shows a wheel from Amaravati, 3rd cent CE).The idea of the Dhamma wheel with eight spokes, representing the steps on the Noble Eightfold Path is almost unknown in Indian art. The earliest eight-spoked Dhamma wheel I know of it, if indeed it is, dates from about the 4th century CE (2nd picture) and I have only ever seen one or two others. The fact that Indian Dhamma wheels are depicted with spokes ranging from seven to 31 shows that the number of spokes was not considered significant (3rd picture, multi-spoked wheel from Thailand, 6th ce 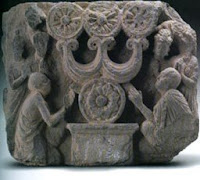 nt). I know of no mention of an eight-spoked Dhamma wheel in Sanskrit literature, but look forward to someone contradicting me (give sources). Likewise, Dhamma wheels from other Buddhist cultures rarely have eight spokes. The symbolism of the wheel in Buddhism as presented in the Wikipedia entry on Dharmacakkra, is fanciful and unhistorical. Sometimes in early Buddhist art three multi-spoked wheels are used to symbolize the Three Jewels (4th picture). By the Gupta period the wheel was often depicted flanked by two deer, an arrangement that is still widely used today. The wheel with eight spokes and the spokes extending beyond the rim (like a ship's wheel) seems only to have come into vogue in China and Tibet at a much later period.

Of course, there is no official Buddhist 'Commissioner of Symbols' who decides what symbols will be used and what they are meant to represent. They have the meaning they are given and this will change through space and time. However, the meaning of the wheel in the earliest Buddhist tradition and throughout Indian Buddhism generally, was that of spiritual power, dominion and authority.
Posted by Shravasti Dhammika at 2:07 AM