The following essay has absolutely nothing to do with the Dhamma. But hey! Having a break even from the Dhamma every now and then is a good thing. Keeps the mind fresh. I wrote this years ago as part of a proposed book which never saw the light of day. It reflects my interest in elephants, Sri Lankan history and obscure and useless facts.
The first time elephants were seen in Europe was in 280 BC when Pyrrhus of Epirus and his army of 25,000 men and 20 elephants crossed from north Africa to Terentus in the heel of Italy to begin their march to Rome. The Romans were bewildered, not to say terrified, by the huge creatures and not knowing what to call them, dubbed them ‘Lucanian oxen.’ In the following centuries elephants from both Africa and Asia became a familiar sight in the amphitheatres, parade grounds and battle fields of the classical world. But with the fall of Rome and Europe’s decent into the Dark Ages, the elephant, although vaguely remembered, was rarely seen again until 802 AD.
In that year the caliph of Baghdad, Harun al Rasheed, gave Charlemagne, the Holy Roman Emperor, an elephant as part of a goodwill gesture. The creature caused a sensation until two years later, when it drowned while crossing the Rhine. About four hundred years later, Frederick II of Sicily (1212-50) was given an elephant by the sultan of Cairo. He rode it into Milan during his victorious entry of the city in 1237. It died in 1248. The first elephant in England since classical times arrived in 1255 as a gift to Henry III from Louis IX of France, who had brought it back from the Holy Land on his return from the Crusades. A special house was built for it in the Tower of London, but the harsh northern winter proved too much and it died in 1258. In 1550 before leaving Spain to return to Vienna, Prince Maximillian, later to become Holy Roman Emperor Maximillian II, made a quick trip to Lisbon to meet his uncle King John III. While there he visited the royal menagerie where he was fascinated by the many exotic birds and animals from the East, but in particularly by the elephants. Consequently, his uncle promised to give him one. He suggested that Maximillian name the elephant Sulayman, after the sultan of Turkey, who was then the West’s most feared enemy "so that in this way he becomes your slave and is properly humbled". When Maximillian disembarked in Genoa during his homeward journey in the summer of 1551, he was delighted to find that the promised elephant had arrived just before him. Soon after the royal entourage, together with Sulayman, set off for the long trek to Vienna, crossing the snow-covered Alps in mid-winter, and arriving in the city in March 7 1552. As the royal party rode through the streets, Maximillian was somewhat peeved to find his elephant attracted more attention and admiration than he himself did. It seems that in the crush to see and touch the strange creature, a child was separated from its mother and fell at the elephants feet. The creature gently picked him and placed him back in his mother’s alms. This so astonished the throng that a plaque was set up at the place where it happened and it may still be seen there today.
It is very difficult to know whether these and a few other elephants that turned up in Europe in the late Middle Ages were from Africa, India or Sri Lanka. One is tempted to think that the elephant given to Charlemagne by the Caliph was from India as the Muslims had already conquered Sindh by then. On the other hand, it is also known that the Arabs had a flourishing trade with Sri Lanka during this period. When Dom Lourenso landed in Colombo in 1505 he saw Arab ships loading elephants to be taken to Cambay.
So an elephant from ‘India’ could well have originally been shipped from Sri Lanka 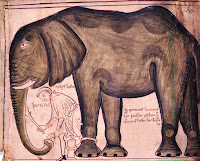 . Henry III’s elephant was almost certainly not Asian, as a drawing of it from life by Matthew Paris shows it with the sloping forehead and large ears of the African variety. This drawing by Paris can claim to be Europe’s first reasonably accurate representation of the elephant since Roman times. The picture shown a man near the elephant’s trunk and the script under its belly reads, ‘By the size of the man drawn here the dimensions of the animal may be imagined". Maximillian’s elephant may well have been from Sri Lanka, but the lack of documentation make it impossible to say.
At the beginning of the 16th century Portugal was still a small kingdom on the outer edge of Europe which nobody took very seriously. King Emmanuel I was proud of his newly conquered empire in the East and was anxious to get recognition for his achievements. To this end, he had taken to sending gifts of exotic animals - talking parrots, trained monkeys, brightly-plumed birds - to other European monarchs and prelates, but up to then this had earned him little more than derision. So finally he decided on a gesture so spectacular and so extravagant, that it would be bound to win him admiration if not envy.
On the 12th March 1515 an embassy from King Emmanuel to Pope Leo X arrived in Rome to an enthusiastic welcome. It was met at the gates of the city by a select body of gorgeously attired cardinals, and then led through the streets to the appointed accommodation. The embassy was headed by Tristan de Cunha - soldier, seaman, former Viceroy of India, and discoverer of the tiny south Atlantic island that still bears his name albeit in a distorted form - Tristan d’Acunha. De Cunha brought with him generous samples of all the riches and wonders of the East; jewels, fine cloth, aromatic gums, spices and especially strange animals. These included a panther that was trained to hunt like a dog, two leopards, and magnificent Persian steeds. A rhinoceros from Gujarat was to be included as well but the ship carrying it sunk, and the poor creature drowned. However, after its carcass was washed up, it was stuffed and exhibited throughout Europe. Albrecht Durer, the greatest German artist of the age, saw this stuffed rhino and made his celebrated engraving of it. The most famous of the exotic animals gifted to the Pope however was an elephant from Sri Lanka.
Many subsequent accounts of the Portuguese embassy say that this elephant was from India, but this is not correct. In the early days of Portuguese expansion ‘India’ referred to just about everywhere from the Straits of Hormuze to Malacca. When Don Lourenco landed in Colombo in 1505, the king of Kotte gave him cinnamon and an elephant "as tribute in return for Portuguese protection". That, at least, is how the Portuguese saw it. The Sri Lankan king however, was probably doing no more than trying to humor these pushy, potentially belligerent, strangers in the hope that they would go away and not return. The elephant was taken to Goa and later shipped to Lisbon. Gaspar Correa was referring to this creature when he wrote that "the viceroy (at Goa) sent a very small elephant, one of those brought (from Sri Lanka) by Don Lourenco, which was the first that ever went to Portugal". Details of the elephants subsequent stay in the Lisbon are meager. Undoubtedly, he was kept in the royal menagerie.
Led by a herald bearing the alms of the Portuguese kin, the embassy made its way to the pontifical palace where the Pope stood on the balcony to receive it. When the elephant arrived, it stopped and bowed three times to the Pope. This was taken as symbolic of the conquered pagan East submitting to the Truth of Rome. The gasps of amazement that accompanied the animals genuflection were due in part to the prevalence of the old superstition that elephants had no joints in their bodies. The elephant then took water in its trunk from a nearby trough and showered the multitudes, to the great amusement of the Pope and his court. Six days later, the public audience took place, and the gifts were handed to the Pope in the presence of the assembled ambassadors and grandees from all the royal courts of Europe. The extravagance and novelty of it all was dazzling, and it was clear to everyone that Portugal had arrived. The next day, the Pope and specially invited guests, retired to the pontiffs private garden to examine the animals more carefully. The panther’s hunting skills were demonstrated on some hapless rabbits and birds, much to everyone’s satisfaction. When the elephant was introduced to its new master, the Pope declared that he would name it Hanno (Annone).
Posted by Shravasti Dhammika at 4:24 AM