The Bodhisattva As Veterinarian

One of the most beautiful legends in the whole of the Buddhist tradition comes from the 12th chapter of the apocryphal Abhiniskramana Sutra and concerns a goose. Once, while walking through the palace garden, Prince Siddhattha saw a goose fall from the sky with an arrow lodged in its wing. He gently nestled the bird in his lap, extracted the arrow and anointed the wound with oil and honey. Soon afterwards, Devadatta sent a message to the palace saying that he had shot the bird and demanding that it be returned to him. Siddhattha replied to the message by saying: ‘If the goose was dead I would return it forthwith but as it is still alive you 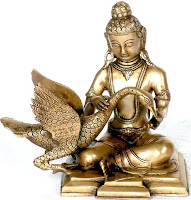 have no right to it.’ Devadatta sent a second message arguing that it was his skill that had downed the goose and as such it belonged to him. Again Siddhattha refused to give his cousin the bird and asked that an assembly of wise men be called to settle the dispute. This was done and after discussing the matter for some time the most senior of the wise men gave his opinion, saying: ‘The living belongs to he who cherishes and preserves life, not to he who tries to destroy life.’ The assembly agreed with this and Prince Siddhattha was allowed to keep the goose. Although not found in the Pali Tipitaka, the story of Prince Siddhattha and the goose may have been based on fact. Whatever the case, it reflects Buddhism’s regard for nurturing kindness and respect for all life.
The Sanskrit and Pali word hansa is usually incorrectly translated as ‘swan’ but swans are not native to India and were unknown to the ancient Indians. The goose so often referred to in the Tipitaka and later Buddhist literature is Anser indicus, the Bar-headed Goose. About the size of the domestic goose, this beautiful bird has grey, white and brown plumage and a white head marked with two distinctive black bands. Its gentle, musical ‘aang aang aang’ call is widely acknowledged to be one of the most enchanting in the natural world. The Buddha was sometimes compared with the goose and the bird’s characteristics and habits were often used as a metaphor for certain spiritual qualities. For example, the Buddha said that householders are like the peacock in that they are beautifully colored but a clumsy flier while monks and nuns are like the goose, drably colored but able to soar into the sky (Sn.221).
Posted by Shravasti Dhammika at 3:39 AM