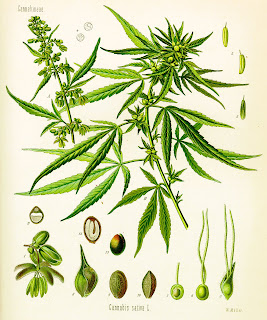 Cannabis (bhanga) is a tall herb with board spear-shaped, serrated-edged leaves and which gives off a strong odour. The plant is known to botanists as Cannabis sativa. In ancient India cannabis fibre was used to make ropes, mats and cloth (D.II,350; Vin.III,256). The Buddha commented that cloth made from this fibre was unattractive, rough, cheap and when worn out was used to scour pots (A.I,246), although he allowed monks and nuns to wear robes made out of it. Smoking dried cannabis leaves or ingesting the resin from its flowering tops, has a dramatic effect on the cardio-vascular and the central nervous systems. In small amounts it imparts a sense of well-being and relaxation and in higher amounts causes sensory distortion, an altered sense of time, short-term memory loss, hallucinations and sometimes toxic psychosis. For centuries, certain sects of Hindu ascetics have smoked cannabis believing that they are able to commune with Siva while under its influence, although taking cannabis for its hallucinogenic effect is mentioned nowhere in the Tipitaka. From the Buddhist perspective, taking cannabis would be breaking the fifth Precept.
Like many people before and since, the Buddha recognized the medicinal value of cannabis and he recommended it as a cure for rheumatism (angavata). The patient should be placed, he said, in a small room filled with steam from a tub of boiling water and cannabis leaves (bhangodaka), and inhale the steam and rub it on the limbs (Vin.I,205).
Posted by Shravasti Dhammika at 12:02 AM

Interesting post about cannabis. Back before my Buddhist days I was an avid cannabis user but have been off of it for years. I never would have thought rheumatism could possibly be helped by rubbing the leaves on the body. That's a new one. I wish you well.

Bhante, I have a question regarding the Fifth Precept. I have heard from some teachers that this precept prohibits the use of alcohol, drugs and the like without exception. I have heard from another teacher that substances should not be ingested to the point of heedlessness, or ingesting anything to the point where it clouds the mind.

Dear Dyanne,
The fifth Precept pertains to drugs taken for no other reason than to get a ‘kick’, what are usually called ‘recreational drugs’. Most drugs have a medical application and so to say that you should not take drugs 'without exception' is tantamount to saying that taking medicine is against the Precepts, which is absurd. Now some medicinal drugs ‘cloud the mind,’ For example, during an operation a patient will be rendered unconscious so he or she will not feel the pain of the scalpel. Being administered or taking such drugs would still not be against the Precepts because (and how many times do we have to say it?) intention (cetana) determines whether an action is positive or negative. Clearly, there is a difference between taking a drug to make a life-saving operation or a life-enhancing medical procedure possible and taking marijuana to ‘chill out’ or a whisky on the rocks to ‘unwind.’

Thanks for taking the time to discuss this, I feel strongly that love and read more on this topic. If possible, such as gain knowledge, would you mind updating your blog with additional information? It is very useful for me. weed

Great tips regrading Marijuana. You provided the best information which helps us a lot. Thanks for sharing the wonderful information.