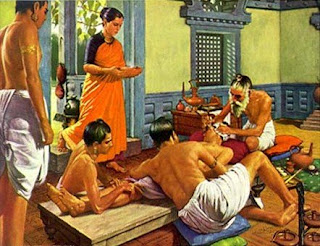 A doctor (bhisakka, tikicchaka or vejja) is a person who has been trained in and who practices the science of medicine. Because of his concern for human happiness the Buddha frequently addressed issues relevant to the medical profession. He listed eight causes of sickness (S.IV,230). He suggested that one's outlook and attitude might have a part to play in healing (A.III,144) and mentioned that one could maintain psychological well-being despite physical sickness (S.III,2). In what could form the basis of a Buddhist equivalent to the Hippocratic Oath, he once said: `One who cares for the sick is fit to do so if he has five qualities. What five? He can prepare medicine, he knows what is healing and administers it but never administers what is harmful, he cares for the patient out of love not out of desire for gain, he is unmoved by excrement, urine, vomit and spittle, and from time to time he can instruct, uplift, gladden and encourage the patient with talk on Dhamma' (A. III,144). The Buddha's teachings added certain ethical elements to the medical practices current during his time. Sushruta, the father of Indian medicine, advised the physician not to treat a patient who might die so as to avoid being blamed for his or her death. By contrast, the Buddha said that patients should be treated and nursed even if they are going to die, out of compassion for them (A.I,121). The Buddha was often compared to a doctor: `The Buddha is like a skilled physician in that he is able to heal the sickness of the defilements' (Pj.I,21). Once he even called himself: `the supreme physician' (anuttaro bhisakko, It.101). Buddhist monks have long served as doctors despite this being against the Vinaya. It is not known who discovered smallpox inoculation but the procedure was introduced into China by an Indian Buddhist monk named Amritananda in the 7th century.

Sorry for the state of this post. Since returning from Sri Lanka I'm having problems with my computer. Hope to fix it soon.
Posted by Shravasti Dhammika at 12:55 AM