Buddhism In The News

Just the other day in the US at a John McCain rally, in front of thousands of people, the Revered Arnold Conrad of the Grace Evangelical Free Church addressed a prayer to God. In his prayer Conrad told God that millions of people around the world were praying to Hindu gods, Allah and Buddha that Barack Obama would win the up-coming election and that if he did these people would think their gods were greater that the one true God, the hint being that God should make sure John McCain wins. The ignorance, the presumption, the conceit, the parochialism, the bias of some of these pastors is enough to literally take your breath away. Anyway, it will be interesting to see if God sees things the way Reverend Conrad does and whether he listened to his prayers. Take a look at http://juniper.typepad.com/buddhist_jihad/2008/10
On Sunday 12th Oct. there was a full page article in the Straits Times about Singapore's two most popular Christian pastors; Reverend Joseph Prince and Rev. Kong Hee. God has been very good to both men, filling their churches' coffers with a combined yearly take of nearly $80 million and allowing them to live in opulent apartments, drive luxury cars and wear expensive suits. Reverend Prince also runs a chain of fashionable boutiques and his church has just entered into a tie-up with property giant Capital Land to develop a $600 million lifestyle hub at Bona Vista. Jesus, with his rough homespun robe and sandals, would probably be refused entry to this 'lifestyle hub' when it opens. A friend of mine, a drop-out of Princes' church, described it to me as 'the Californ

ia Gym of churches' and I don’t think he meant it as a complement. Apparently Prince is not the Reverend's original name but one he gave himself later in life and his new book is called Destined to Reign. Mmm. Interesting! The journalist who wrote the Straits Times article seemed genuinely awed to be granted an interview with Prince and the result is as much an accolade as an article.
Having read about the 'success' of these two pastors and starting to think that I might have actually picked the wrong religion, I turned to page 30 and there was an article about the English/Australian Buddhist monk Ajahn Bhahmavamso who happens to be visiting town. The article mentions that Brahmavamso doesn't even touch money and lives a simple austere life. Goodness! He doesn't even wear an $8000 suit or a $190 hairdo! Every now and then it's good to be reminded of what religion is really supposed to be about. In some ways it reminds me of that Heineken Beer add which says 'When you make a great beer you don’t have to make a great fuss.'
In response to these two articles a local Christian speaker, Monte Lee Rice, said to a congregation - 'And finally brothers and sisters, I am compelled to draw attention to the article in today’s paper titled, “I, who have nothing.” This is a short write-up about the British born Buddhist monk Ajahn Brahm, whose picture most of us have at some point seen occasionally in the paper or around town. I am not a Buddhist; I am a Christian. But boy, what shame this man brings upon us! He “travels up to 10 times or more a year” all over the world, “pe 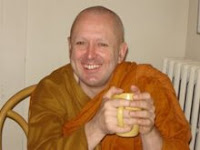 ople turn up by the thousands to listen to him,” and yet he “does not carry a single penny, has no mobile phone or MP3 player,” and “sleeps on the floor and has one meal a day from his alms bowl.” The article mentions that Ajahn Brahm “doesn’t believe religious leaders should be paid a lot of money either.” I think we better listen to this: “How much money did Jesus have? He had nothing… We’re at an economic downturn here and many people are afraid of what might happen if they lose their savings and house, and I can come along and say I’ve never had a house and savings and I can be happy and peaceful. If I can do that with nothing, you don’t need to be afraid.” '
One local Christian blogger also read the articles about the two pastors and Ajahn Brahmavamso, noticed the contrast they highlighted and commented that 'maybe God is speaking to us through a Buddhist monk'. That’s an interesting way of looking at it. It doesn't matter who says it, does it, thinks it, suggests it or writes it, God always gets the credit - even when it actually originated from the Buddha or one of his disciples. But anyway, surely Christians don’t need to listen to a Buddhist monk to know what Jesus taught about wealth and worldly success. Its already in the Bible. 'If you would be perfect, go, sell what you possess and give it to the poor and follow me and you will have treasure in heaven' (Matthew. 19:21). 'But woe to you that are rich, for you have received your consolation. Woe to you that are full now, for you shall hunger' (Luke. 6:24-25). 'Truly, I say to you, it will be hard for a rich man to enter the Kingdom of Heaven. Again, I tell you, it is easier for a camel to go through the eye of a needle than for a rich man to enter the Kingdom of God' (Matthew. 19:23-24). 'People who want to get rich fall into temptation and a trap and into many foolish and harmful desires that plunge men into ruin and destruction. For the love of money is the root of all evil. Some people, eager for money, have wandered from the faith and pierced themselves with many griefs' (I Timothy 6,9-10). 'Now listen, you rich people, weep and wail because of the misery that is coming upon you. Your wealth has rotted and moths have eaten your clothes. Your gold and silver are corroded. Their corrosion will testify against you and eat your flesh like fire. You have horded wealth in the last days' (I Peter 5,1-2). 'Do not love the world or anything in the world. If anyone loves the world, the love of the Father is not in him. For everything in the world - the craving of the sinful man, the lust of his eye and the boasting of what has and does - comes not from the Father but from the world' (I John 2, 15-16).
Posted by Shravasti Dhammika at 12:10 AM

You always find some interesting and hilarious things. Destined to Reign? That is worth reading for the cover alone! Have you ever read "Stairway to Hell?" That is probably the most outrageous fundamentalist book I have ever read. It's always interesting around here. Be well.

Unfortunately, most 'new age spiritualists' (especially from the US) promote the idea that spiritualism can co-exist with wealth creation and accumulation. This idea has now crept into mainstream religions and hence the observations made by this author. It is nice to know that some one was bold enough to say that the Emperor is not wearing any clothes!