Going To The Toilet

A toilet (vaccakuti) a place, usually a small room, for passing bodily waste and which contains some means for disposing of that waste. Toilets at the time of the Buddha consisted of a cesspit (vaccakupa) covered by a stone or plaster slab (paribhanda) with a small hole in it. On either side of the hole was a raised footprint-shaped platform (vaccapaduka) on which one stood or squatted. After finishing, one either washed or wiped oneself with grass 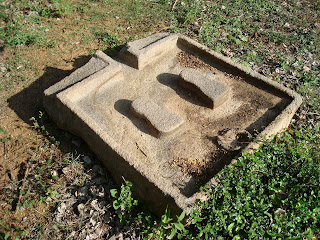 or a piece of wood. Outside the toilet was a water pot for washing the hands. The Buddha understood the importance of hygiene and insisted that the toilets in monasteries be regularly washed and swept. In the Vinaya he also spoke of what might be called ‘toilet etiquette.’ On nearing the toilet one should make a coughing noise to let whoever might be inside know that someone is coming. If someone is inside they should likewise make a coughing noise to indicate that the toilet is already occupied. The robe should be taken off before entering and properly hung up. One should not groan while relieving oneself, clean one’s teeth or spit on the floor. Also, after finishing, the water containers should be refilled as a courtesy to the next person (Vin.II,222).
The Chinese monk I-tsing who visited India in the 7th century wrote a detailed account of Indian monastic life at that time. In his account he included a separate chapter on toilets, how to use them and the importance of maintaining a high standard of toilet hygiene.
The heart of Buddhist meditation is Right Mindfulness. In the early stages of this practice, the meditator becomes aware of the gentle in and out movement of the breath and then expands it to becoming aware of all aspects of himself or herself; the whole body, feelings, the mind and then the contents of the mind. But if one can only be mindful while sitting in a quiet room, one will only be aware of a small part of one’s life, a rather uninteresting part. To be really fruitful, mindfulness has to flow into everything one does. The Buddha said: ‘A monk has full awareness while coming and going, while reaching out his hands or drawing them back, while putting on his robes and carrying his bowl, while eating and drinking, chewing and tasting, even while defecating and urinating. He has full awareness while walking, standing and sitting, while falling to sleep and waking up, while talking and remaining silent’ (M.I,57). When the Buddha said that we should be mindful ‘even while defecating and urinating’(uccarapassavaka kamme) he was saying that all activities no matter how commonplace should become an object of lucidity and presence. When done with mindfulness every action, from the most lofty to the most mundane, becomes sacred.
The picture shows a toilet in the ruins of an ancient monastery in Sri Lanka.
Posted by Shravasti Dhammika at 12:34 AM

Ah so no magazine in the toilet for the purpose of Right Mindfulness...