Every time I go to Delhi and if I have the time, I visit the Jain bird hospital at the end of Chandi Chowk, just across from Lal Quilla. It is in the grounds of the Digambra Jain Temple. Last time I was there I had a 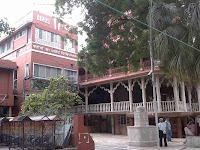 good look around, took some photos and talked to the chief veterinarian, a young man who seemed genuinely concerned about his patients. The bird hospital was founded in 1929 and treats an average of 30,000 birds per year. It has a research laboratory and even an intensive care unit for its serious patients. By Indian standards the hospital is fairly clean although there is a distinct avian smell about the place, not surprising I suppose. The cages held mynas, parrots, kites, sparrows, one very subdued-looking crow, two peacocks and numerous pigeons. Delhi is full of pigeons. A sign at the entrance of the ‘wards’ shows how birds in urban India can get injured – by being caught by cats, hit by cars, shot with catapults by naughty boys, by getting tangled in kite strings and flying into ceiling fans. On the second floor is a mural of famous Buddhist Jataka story of King Sibi who cut off his own flesh to give it to a hawk in exchange for a dove it was abou 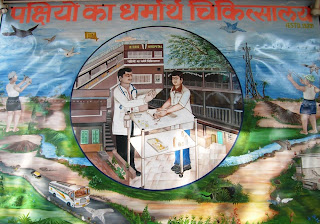 t to eat. I think a version of this same story is in the Jain scriptures too. I asked the doctor how the kites in the hospital were fed seeing as they are carnivorous. He told me that the hospital is very reluctant to take such birds but obviously they must take some. Now some could argue that in an Indian city like Delhi where thousands of people live in the street and without even rudimentary medical care, that time and effort could be better spent on helping them. In some ways this is a compelling argument. But all the same, I'm glad that at least someone hasn’t forgotten the birds.
Posted by Shravasti Dhammika at 12:08 AM