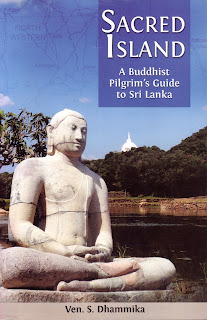 After a four years of delays my book Sacred Island – A Buddhist Pilgrim’s Guide to Sri Lanka has finally been published. It took so long to see the light of day I was starting to fear it might come out as a commemorative volume. I’m far from happy with the editing, the pictures and the maps but most people who have already seen it seem to like it. In the process of doing research for this book I encountered Tiger terrorists near Mahakacchakodia, had my way blocked by an angry elephant at Nagalakanda and got lost for a day and a half in the jungle around Puttalam. I went to Point Pedro, the northernmost point in Sri Lanka, Dondra Heads, the southernmost point, to a place near Hambantota which is 21 ft below sea level, the lowest place in Sri Lanka, and I climbed to the top of Pidurutalagala, the country’s highest mountain. Of course not all this was done in one trip but rather during many trips over several years. Viraj and Sunil came with me on about half these journeys.
One of our destinations was Tiriyaya in the far north of the east coast on the edge of terrorist-held country. There is a beautiful stupa there on the top of a hill overlooking the ocean which was supposedly built by Tapussa and Bhalluka. With the greatest difficulties we made our way as far as Kodduvarakattu about ten miles from Tiriyaya when the army stopped us. Now I want to tell you that the army is very suspicious of anyone they find wandering around in insecure areas like this; understandably I suppose. With guns at the ready the soldiers took us to their officer who politely but firmly interrogated me. I think he thought I was a spy, or worse, a journalist. I dropped the names of a few big monks I know, he realized that I really was just a simple monk and the tension eased. But then he turned to Viraj and really began to grill him. It was a bit touch and go for a while but eventually suspicions were allayed. Then just as things got better they got worse. The officer refused to let us go any further. ‘The terrorists sometimes come at night to round up the cattle that the peasants left when they abandoned the area. 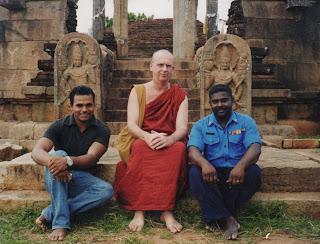 They eat them’ he said. ‘I can’t take responsibility for your safety.’ ‘No worry’ I said blithefully, ‘we’ll take responsibility for ourselves.’ The officer looked me in the eye and said ‘No!’ in a way that left me in no doubt that he was not going to let me talk him into letting us proceed. After having got all that was it was extremely frustrating to be turned back just ten miles from our goal. We could even see the mountain from across the lagoon. A few months later I happened to meet a close friend of Admiral Karunagoda, the head of Sri Lanka’s navy. I told her of my desire to go to Tiriyaya, the trouble I had in getting there and asked her if he could put in a good word for me to the admiral. It worked. We were given a telephone number at the naval base at Trincomalee and told to ring it when we got up there. We did as asked and at the pre-arranged time two jeeps turned up where we were staying, one for us and the other for four heavily armed soldiers. And that’s how I finally got to Tiriyaya.
Now when I went to so much trouble and endured so many hardships to get material for this book I hope that at least some of you are going to read it. If you intend to visit Sri Lanka it is a must. And even if you are not you might still find it an interesting read. Sacred Island – A Buddhist Pilgrim’s Guide to Sri Lanka is available from the Buddhist Publication Society, Po Box 61 Kandy, Sri Lanka or at http://www.bps.lk/
Posted by Shravasti Dhammika at 12:06 AM

Sri Lanka is the next Buddhist pilgrimage country I want to visit.