To the best of my knowledge, the oldest advice on oral hygiene is to be found in the Buddhist scriptures, the Pali Tipitaka. In the Anguttara Nikaya the Buddha says, 'Monks, there are these five advantages of using a tooth stick. What five? The eyes stay bright, the mouth does not become bad-smelling, the taste buds become clean, phlegm and mucus do not get in the food and one enjoys one's food' (A.III,250).
The word for tooth stick is danthakattha. The mention of the eyes is probably a reference to the fact that oral infections can affect the sinuses and eventually the eyes. The word for taste buds is rasa harani. Harani means 'nerve' or 'channel' and actually refers to the papillae, the knob-like projections on the tongue which contain the taste buds. According to the Jataka there are 7000 rasa harani (Ja.V,293). The last of these five advantages - enjoyment of food - shows that the Buddha had nothing against enjoying the simple pleasures of life. Anyone who has ever read the Buddha's words will of course know this but the old canard that a good Buddhist 'should shun all and every pleasure life has to offer' (a phrase I just found on an academic wed site on Buddhism - where do they get this nonsense from?) is still alive and well.
The Buddha does not mention what type of stick should be used for cleaning the teeth but we know from later sources that twigs of the neem tree (Azadirachita indica, nimba in Pali) were used for this purpose and indeed they still are. The Jatakas mentions people cleaning their teeth with naga twigs early in the morning (Ja.I,232; IV,363; V,56). Naga is an alternative name for the Betel vine (Piper betle, tambula in Pali). The active ingredients of betel 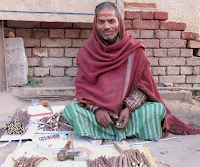 and especially of neem, have strong disinfectant and antibiotic properties. On several occasions while in India I have tried to clean my teeth with neem twigs but I just couldn’t do it - too bitter. But Indian peasants do it every day. The twig is cut to about 10 inches long, frayed at one end, chewed for a while and then rubbed up and down over the teeth. While doing this a white foam forms which is occasionally spat out. Indian villagers commonly have receding gums quite early in life probably as a result of poor diet and rubbing the tooth stick over the teeth too vigorously. The Buddha's comments on teeth cleaning shows that he was not only concerned that we should treasure our health but also take steps to prevent becoming sick.
Posted by Shravasti Dhammika at 12:34 AM

"...and one enjoys ones food." Very timely. I was just discussing sense desires with a friend. He asked if it was okay to eat flavorful food or did a follower of Buddha have to eat bland stuff. Now I have a quick quote to send him!

Dear Venerable Sir,
I remember buying some cleaning twigs in an Indian railway junction one time. I too didn't get on with them for the same reason- they certainly gave the teeth and gums a good workout though.

"Anyone who has ever read the Buddha's words will of course know this but the old canard that a good Buddhist 'should shun all and every pleasure life has to offer' (a phrase I just found on an academic wed site on Buddhism - where do they get this nonsense from?) is still alive and well."

It's unfortunate, but even the Buddha predicted the decline of the Sasana

Another term is "miswak". The Sewak Al-Falah Miswak Stick is available at Mustafa for SGD$1.20 per stick. It is hygienically packed.

I had tried it out of curiosity on mid week just as I coincidentally read your article, it is not bitter at all (the one from Mustafa). But certainly not as easy to brush as using a toothbrush. But it does feel clean after using the miswak.

I, too, have used the Miswak for cleaning the teeth. These twigs are from the Salvadora persica tree, and there is quite some evidence of their benefit (even compared to a modern toothbrush). I would be interested to know if these twigs or roots have been used in the buddhist tradition as well? The tree/shrub is found in many countries with a buddhist presence.
May you be well. Metta.