Who Could Doubt It?

I found this article on the internet. It inspired me so much I thought I might share it with you. It contains all the things that make Tibetan Buddhism so compelling - claims made in ancient scriptures, self-evident truths and a teaching authority based on a chain of rebirths, all of which is verified by prophesies, visions, miracles and supernatural signs. And if this doesn’t convince you of Rimpoche's profound spirituality then his astonishing achievements and genuine modesty will. Even though this is only 'a very short introduction' I unfortunately had to cut it down a bit to fit it in. The part about the 'cock sized light' is in the original.
The Pre-eminent Qualities of Tsoma Gontse Rimpoche and His Compassionate and Altruistic Activities
The par excellent and most gracious Dharma that is as rare as refined gold, is the source of every happiness and prosperity of all sentient beings. The precious Buddha Dharma flourished and developed extensively in Tibet owing to energetic, incomparable and sincere efforts of the great numbers of highly esteemed masters of India and Tibet. One of this great masters as mentioned in the text 'Lamrim bLa rGyud'; was the omniscient Tsonawa, popularly known as ‘dul ba’ bum sDe’I mNga’ bDag’ (the great master of Vinaya). Lord Buddha attained Mahaparinivana around 2550 years ago and 400 years latter eight great masters were born in this world. They were collectively known as Six Ornament and Two Excellences. The most renowned of them was Nagarjuna, the closest and heart disciple of pandita Sarah from Nalanda. He wrote Middle Way treatise in a very comprehensive manner. During the time when his religious activities were as the highest level Khedubje the direct disciple of rJe Tsong Khapa had been born as Rig pai Khubyung in India. Rig pai Khubyung had received teachings of profound views from Nagrjuna. That time Nagarjuna prophesied saying 'I pray I could go to Tibet for the purpose of sentient beings there and that time, you will be among the first group to be trained’. rJe Tsong Khapa and Nagarjuna are believed to be of one and the same mind but in different manifestation. It has been prophesied in sutra that Nagarjuna would be born as Jangsem Norsang, then after that at the time early diffusion of Buddhism he would be born as Kawa Drimedo. He would invite many experts’ panditas from India and translate their teachings into Tibetan there by helping people to a great extent. Then during the period of later diffusion of Buddhism in Tibet he would be born as gNyos sTon Chosbar, who would develop and spread teachings of Atisha like that of sun shine. As prophesied by Geshe Potowa, he passed away at the age of 63. It has been said that after his passing away, amazing miracles took place. Many self-born Buddha statues appeared on 21 backbones with many relics. And Mandala of Charkrasamvara is said to have also appeared inside the Kapala (bdu Thod) and 21 Taras outside the Kapala. Further, on the right shoulder white Miyova is said to have appeared and on the left shoulder appeared Avaloketeshvara and number of relics were born from his tongue, heart and eyes. Later he was born as Lhari sDe sNod zinpa. He studied and practiced the instruction of Chakra samvara. He also saw vision of mandala of the same. In his will, he said, 'Twenty-one-to twenty two years after I die, amber of Buddha’s Dharma will flourish little more'. During the cremation bright light emitted from dead body of Lahri sDe sNod zinpa about cock size and faded away towards the Tsona province of Tibet. This miracle witnessed by local folks. Tsonawa Sherab Zangpo is believed to be the reincarnation of Lhari sDe sNod zinpa. At the age of 21, he regenerated Buddha’s Dharma as a whole and particularly giving more importance to the code of discipline laid down in Vinaya. Again Phelchen Sutra says, 'In the place called Zhiwa Rinchen, Chogigling Tsonawa would be born. This region would become the place of learn, he would be able to dispel the darkness of ignorance and prove to be great leader of sentient beings to the path of Enlightenment'. It is evident from here that he derived his first name Tsona’ from the name of a place and Sherab Zangpo was his ordination name. Je Tshongkhapa had said 'There is no text written better than Tsonawa’s Tsotrig nyimay odzer and there is no need of another text!' Saying so, Tsonawa was highly acclaimed as the highly qualified master and called him 'dul ba’ bum sDe mNga ‘bHga Tsonawa' (the master of Vinaya). Later on the great Tsonawa Sherab Zangpo, whose name could not be easily uttered, reincarnated as Jetsun Sherab Zangpo and he reincarnated as Thupten Jampal Wangchuk. Thupten Jampel Wangchuk was norn in Murshing aty Mon region in 1903, Arunachal Pradesh, India. He has mastered all the sutras and tantras and was renown all over the places. He passed away at the age of 63. Venerable Jetsin Tenzin Jampel Wangchuk is now revered as the re-incarnation of Thupten Jampel Wangchuk. He was born in 1967 on the 19th Augustat Nyesar Junpagon of Mon-Tawang in Arunachal Pradesh, India. He was recognized as reincarnation of Lam Thupten Jampel Wangchuk by H.H. The 14th Dalai Lama. He started his education at Drepung Loseling Monastery, South India and is well-versed in all the treatise. He also obtained the degree of Geshe Lharampa. After he obtained his degree, he bec 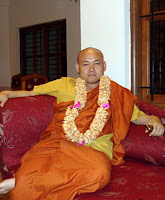 omes the president of Buddhist Culture Association of Himalaya. As a president he worked towards the development of mutual relationship between various culture and religion of India and endeavored towards preservation of flora and fauna to maintain a peaceful environment. Further, he has taken the great responsibilities of developing the religion and the culture of Mon region. He has established numerous monasteries, Educational Centre, Stupas and Cottage Industries. He was Minister of State, Industry, Textile and Handicrafts and Cabinet Minister of Tourism, Chairman of Advisory council for Tourism Development (ACTD), Govt. of Arunachal Pradesh. And he now holds the position of Chairman, Hydropower Development Corporation, (APHPDC) Govt. of Arunachal Pradesh. He has got international recognition as an authentic and excellent social worker and fully accomplished spiritual master. He received several national and international awards for his tireless efforts and social works for the well being of people around the world. He has the privilege of attending the millennium UN world peace summit at the United Nations Assembly Hall as the first ever Buddhist representative from the entire Himalayan region. This is a very short introduction of the Lama Tsonawa, through his works and contributions are unlimited.
Posted by Shravasti Dhammika at 2:16 AM

You must have an astonishing reading speed; that of lightning.

Sorry, I just have to stop after the first 20 lines.

to think how humble that monk is...