Jianzhen (Ganjin in Japanese) was a Chinese monk of the Tang Dynasty who could properly be called a renaissance man. Born in what is now Jiangsu Province in 688 he became a monk while young and studied Buddhism in the Chinese capital for six years, his main field 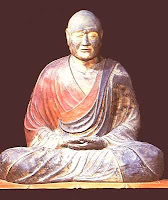 of study being Vinaya. In the succeeding years he mastered many arts including medicine, horticulture and even architecture. His two great achievements during this time were to found a hospital and to organize the copying out of 33,000 scrolls of the scriptures to be distributed to various monasteries.
In 742 a delegation from Japan arrived in China and invited Jianzhen to visit their country to reestablish the correct ordination procedure for monks and nuns. Despite the protests of his disciples and supporters, Jianzhan accepted the invitation and the next year set out for Japan by ship. Bad navigation and unruly weather forced his ship back to China. Three more times he tried to get to Japan and failed. During the fifth attempt his ship was blown off course as far as Hainan Island and in the three years it took him to return home the rigors of the journey were such that he developed an eye infection and lost his sight. Undeterred by his earlier failures and despite being blind he tried to reach Japan yet again and finally succeeded in 753. He arrived in Nara, the Japanese capital, and was greeted by the emperor who put him in charge of the great Todaiji Temple. Over the next two years Jianzhen trained some 400 monks and then ordained them in the proper manner. After this Jianzhen built a temple for himself where he was to reside and teach until his death in 763. In designing and constructing this temple he introduced to the Japanese architectural techniques unknown to them until that time. He is also introduced the art of bonsai and the technique for making soybean curd.
But Jianzhen’s greatest gift to the Japanese was pharmacology and medicine Despite his blindness he could identify numerous herbs by smell alone and he was highly skilled in classifying and storing med 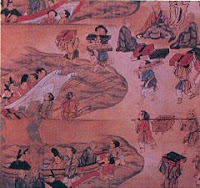 icines so as to retain their potency. He also corrected the many mistakes in the earlier translations of Chinese medical texts. Right up to the end of the 19th century many packets of medicine in Japan had Jianzhen’s face on them. Shortly after he passed away Jianzhen’s disciples made a statue of him so lifelike that it was to radically change Japanese sculpture from then on. This statue can still be seen in Nara.
Jianzhen’s influence and reputation continues to resonate even today. He is still considered the father of Japanese medicine. In 1973 China and Japan jointly constructed a Jianzhen Memorial hall at the master’s home temple to mark the restoration of their diplomatic relations. A successful play based on his life has been written by Inooe Yasusi with a musical score by the renowned composer Dan Ikuma. More recently, Jianzhen’s life has been presented in comic book form.
The first pictures is of the famous statue of Jianzhen and the second is a late medieval painting depicting his journeys.
Posted by Shravasti Dhammika at 12:21 AM

I wanted to contact you via e-mail but I couldn't find it on your profile, so I'm posting it here.

Thanks for visiting my blog earlier. I'm really honoured that you visited my blog. As a lay Buddhist, I hoped I didn't misrepresent the Buddha on economics. The posts are based on Schumacher's book and I tend to agree with it. If you feel certain areas are incorrect, please do share your opinions with me.

Life is looking more *crazier* by the day and I'm trying to make some sense of it all.

By the way, I just wanted to share with you Ven. P. A. Payutto's book on Buddhist Economics here. I hope you find it interesting. I would be grateful if you could share your thoughts with me on it as well.

Dear Avatar
Your article is not 'incorrect' , in fact I think it is very sensible. But if it is based on Shumacher don’t call it Buddhist. You will notice that even though Schumacher calls his ideas 'a Buddhist economics' he hardly ever quotes the Buddha either. So why not do this, collect everything the Buddha said about economics, examine it, read Schumacher, Payutto and others and see what you come up with. As I said before, if you look at buddhismatoz.com you will find just about everything the Buddha had to say about economics.

Anyway, something to share. About a year back an old lady whom I know very well, asked me about the effectiveness of prayers to the Medicine Buddha for her husband who got a degenerative disease.

After thinking a while, I shared with her about the 4 Noble Truth and talk about impermanence.

You're right and I've been thinking about doing that in the future. It's going to take a long time to do justice to this topic though.

On hindsight, the better term would be Economics based on Buddhist principles. It's too late to change my current topic description but I'll be more careful in distinguishing the ideas by the various authors in the future.

Thanks for your kind advice.