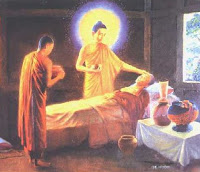 Now at that time a certain monk was suffering from dysentery and lay where he had fallen in his own excrement. The Lord and Ananda were visiting the lodgings and they came to where the sick monk lay and the Lord asked him, ‘Monk, what is wrong with you.’ ‘I have dysentery, Lord.’
‘Is there no one to look after you?’
‘No, Lord.’
‘Then why is it that the other monks do not look after you?’
‘It is because I am of no use to them, Lord.’
Then the Lord said to Ananda, ‘Go and fetch water so we can wash this monk.’ So Ananda brought water and the Lord poured it out while Ananda washed the monk all over. Then taking the monk by the head and feet the Lord and Ananda together carried him and laid him on a bed. Later, the Lord called the monks together and asked them, ‘Why monks, did you not look after that sick monk?’
‘Because he was of no use to us, Lord’
‘Monks, you have no mother or father to look after you. If you do not look after each other who will? He who would nurse me, let him nurse the sick’ (Yo bhikkhave mam upatthaheyya so gilamam upatthaheyya, Vin.I,301).

This is well known incident in the life of the Buddha - at least today. But looking through the literature produced in Buddhist cultures over the last two thousand years - poems, biographies of the Buddha, anthologies of stories, hagiographies, guides to the monastic life, cosmological works etc. - I have been able to find only a single reference to it. I am very familiar with the sculpture, wall paintings and sculptures of India Thailand, Burma, Tibet, China and Sri Lanka which illustrate the life of the Buddha but I have never seen this incident depicted. Mingun Sayadaw’s monumental 2700 page biography of the Buddha mentions almost every conceivable incident in his life - but not this one. The famous and ever-popular Jayamangala Gatha which celebrates the Buddha’s good or miraculous deeds does not consider his nursing the sick monk to be significant. The only mention or depiction of this story that I know of in the traditional literature, sculpture or painting of Theravadin lands is in the Saddhammopayana, a 10th century poem from Sri Lanka. Verses 557 to 560 eulogize the Buddha’s compassion in nursing the sick monk and ask the reader to follow his example. These few words of heartfelt and practical kindness make the Saddhammopayana almost unique in the literature of Theravadin lands. There must be an explanation for this anomaly and one does not have to look far to find it. According to scholars, the Saddhammopayana was composed by a monk of the Abhayagirivasins, a sect that the Theravadins derided as heretics and dismissed as Mahayanists. So although the Saddhammopayana draws on material from the Pali Tipitaka it is not a Theravadin work. Why has the wonderful story of the Buddha and the sick monk – so human, so indicative of loving-kindness and compassion, so worthy of being held up as an example to be emulated – received almost no attention in Theravada?
Now in some things I like being proved wrong. Can anyone find me an example of Buddhist literature mentioning the incident of the Buddha washing the sick monk or a depiction of it. Both must predate 1850. If no one can, and I’m fairly certain no one will be able to, I hope it will prod my readers to give some thought to why the Buddhist tradition has ignored/suppresses/never noticed this incident and what this might tell us about Buddhism as it has been practiced.
Posted by Shravasti Dhammika at 12:35 AM

This post raises a lot of thoughts in me. It's quite surprising that something like this would not get much significance. I have heard Dhamma talks where this is mentioned before but not very often. Perhaps it is because the Vinaya doesn't allow for monks to be doctors? even if that is so it seems like an incident like this is worthy of bringing up and considering and teaching others about. I thank you for doing so.

In the 22 hospitals and clinics my teacher has either built and/or supported with the supply of medical equipment all across Myanmar,and with the on-going cyclone relief efforts in the south to rebuild and or build anew another 20+ hospitals and clinics, a painting of this scene, albeit modern, with the famous quotation in Myanmar/Pali/English inscribed below, appears at the entrance.

Perhaps there are written references to this scene still untranslated into English (from Myanmar, Thai, Cambodian, Lao), but the implementation of the lesson is maybe enough to inspire people to act accordingly.

Dear Ashin,
It is a good sign that some monks are starting to see giving medical help as an aspect of Dhamma practice. If your teacher is Ashin Nyanissara of Sagaing Hill, I will have a post about him in a few days. But my question is this, 'Why is there so little historical or literary evidence of this sort of thing having been done in the previous 2300 years of Theravada?'Yes, it is possible that some as yet untranslated Pali document may show evidence of this but of the many thousands of works so far translated (that I know of) there is none. Why is their no painting, sculpture, drawing, poem, treaties, even, significantly, any ancient medical works (many of which were written by monks) mentioning or celebrating the Buddha's nursing of the sick monk? If I am right about this (and I anxiously await to be proven wrong), your teacher's good work raises yet another interesting question. Why has involvement in helping the sick only began recently in the Theravada tradition?