Albert Einstein described belief in God as ‘childish superstition’ in a letter recently auctioned in London. The father of relativity, whose previously known views on religion have been more ambivalent and fuelled much discussion, made the comments in response to a philosopher in 1954. ‘The word ‘God’ is for me nothing more than the expression and product of human weaknesses, the Bible a collection of honorable, but still primitive legends which are nevertheless pretty childish. No interpretation no matter how subtle can (for me) change this,’ he wrote in the letter written on January the 3rd 1954 to the philosopher Eric Gutkind, The German-language letter was sold by Bloomsbury 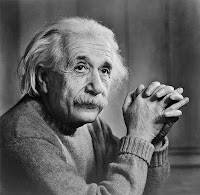 Auctions in Mayfair after being in a private collection for more than 50 years. In it, the renowned physicist, who declined an invitation to become Israel’s second president, (David Ben Gurian is supposed to have said to his cabinet ‘What will we do if he accepts?’) also rejected the idea that the Jews are God’s chosen people. ‘For me the Jewish religion like all others, is an incarnation of the most childish superstitions’, he wrote. ‘And the Jewish people to whom I gladly belong and with whose mentality I have a deep affinity have no different quality for me than all other people’. Previously Einstein’s comments on religion - such as ‘Science without religion is lame, religion without science is blind’ - have been the subject of much debate, used notably to back up arguments in favor of belief in God. This letter reflected Einstein’s real thoughts on the subject.
Okay! That’s pretty clear. Now what did Einstein think of Buddhism? The two most often sited quotes on this subject from Einstein are these -
‘The individual feels the nothingness of human desires and aims and the sublimity and marvelous order which reveal themselves both in nature and in the world of thought. He looks upon individual existence as a sort of prison and wants to experience the universe as a single significant whole. The beginning of cosmic religious feeling already appears in early stages of development – e.g. in many of the Psalms of David and in some of the Prophets. Buddhism as we have learned it from the wonderful writings of Schopenhauer especially, contain much stronger elements of it’.
‘The religion of the future will be a cosmic religion. It should transcend a personal God and avoid dogma and theology. Covering both the natural and the spiritual , it should be based on a religious sense arising from the experience of all things, natural and spiritual in a meaningful unity. Buddhism answers this description. If there is any religion that would cope with modern scientific needs it would be Buddhism’.
I always had my suspicions that these quotes were spurious and once in an effort to establish their authenticity I read a book called Einstein on Religion and there was no reference to Buddhism in it at all. This increased my suspicion. Then about 5 years ago I located the source of one of these quotes, although which of the two and where, I cannot remember. But it verified for me that Einstein did know something about Buddhism and did have a good opinion of it. Can anyone give me and my readers to source of these quotes by the great man?
On the 1st of next month on I will launch my new web site and from the 2nd onwards I will explore the Buddha's teachings about meditation.
Posted by Shravasti Dhammika at 12:21 AM

As you know, I am in the process of compiling the quotes. Will the existing posts be still in this blog?

In a letter to Eric Gutkind in 1954 Einstein said: "The word God is for me nothing more than the expression and product of human weaknesses, the Bible a collection of honorable, but still primitive legends which are nevertheless pretty childish." In the same letter, Einstein rejected the idea that the Jews are God's chosen people: "For me the Jewish religion like all others is an incarnation of the most childish superstitions. And the Jewish people to whom I gladly belong and with whose mentality I have a deep affinity have no different quality for me than all other people. As far as my experience goes, they are no better than other human groups, although they are protected from the worst cancers by a lack of power. Otherwise I cannot see anything 'chosen' about them."

His friend Max Jammer explored Einstein's views on religion thoroughly in the 1999 book Einstein and Religion: Physics and Theology

In an October 2, 1910 interview in the New York Times Magazine, Thomas Edison stated: "Nature is what we know. We do not know the gods of religions. And nature is not kind, or merciful, or loving. If God made me—the fabled God of the three qualities of which I spoke: mercy, kindness, love—He also made the fish I catch and eat. And where do His mercy, kindness, and love for that fish come in? No; nature made us—nature did it all—not the gods of the religions."
He also said: "Nonviolence leads to the highest ethics, which is the goal of all evolution. Until we stop harming all other living beings, we are still savages."

Bante,
"The religion of the future will be a cosmic religion ...". This is from an essay that he wrote expressly for the New York Times Magazine, 9 Nov 1930. If you let me have your email, I can forward the whole essay to you.
On this recent private letter of his, can you please let me have the original source, as I am sure my Christian friends with whom I shall share this latest finding of Einstein's thinking, will like to know ... otherwise, they are likely to contend that this is a creation by a Buddhist monk.
With metta,
Ong Poh Seng

Perhaps you can ask bhante Dhammika to look at this website..

It contains the source of the quote.

Dear Readers,
Despite the 'comment deleted' caption above, I have not deleted any comments. This caption appears every now and then and I have no idea why. Any explainations?

No, but you can absolutly delete it by deleting it doubled.